An artful answer to the cremation question

An artful answer to the cremation question 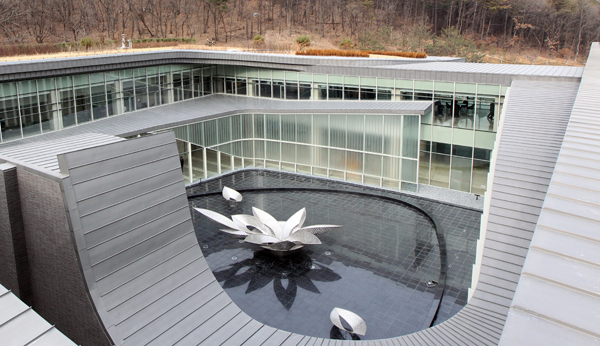 When driving toward Gwacheon after passing through Yangjae Interchange, which is always jammed with cars during rush hour, a peaceful vista emerges just off of the main road. This is the site of a new crematorium, Seoul Memorial Park, which opened on Jan. 16 and is located in this tranquil area in Wonji-dong, southern Seoul. It is the first crematorium in the capital region, replacing the one in Hongje-dong, northern Seoul, that moved to Goyang, Gyeonggi, in 1970.

The new crematorium is circular in shape and follows the natural slope of the mountain behind it. On the roof, there are trees and grass to help it further mesh with its surroundings. There is no chimney because the facility uses advanced technology that ensures it emits neither dust nor gas, according to a crematorium official. Inside, the space has the look and feel of a modern museum. 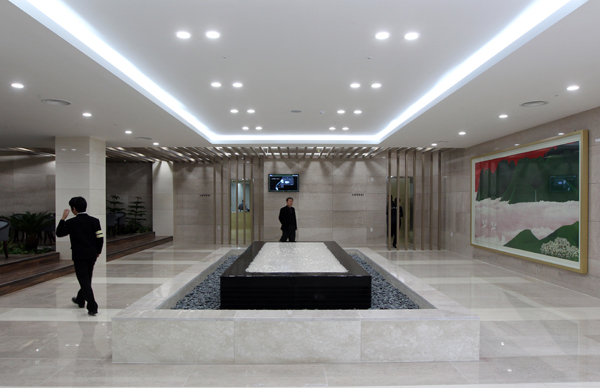 The interior is designed to facilitate the flow of the funeral service, with the main space gently curving around an open courtyard featuring a pond and various sculptures.

After entering the crematorium, mourners move to a reception room to say their last goodbyes, after which they can watch the cremation process on a television screen in a waiting room on the second floor. Then they are led to an exit after the ashes are deposited into an urn. 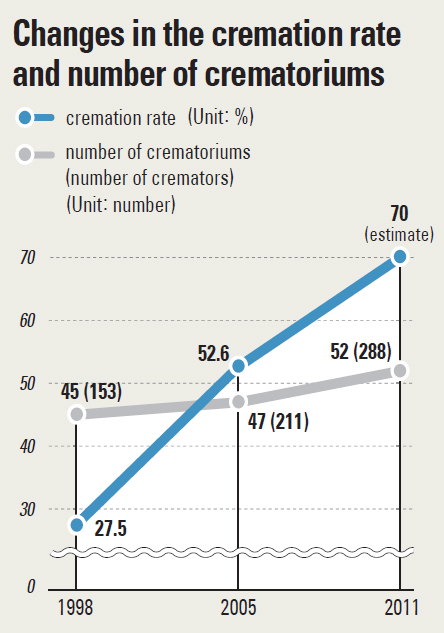 The care and attention to design were carried out with the goal of eliminating the negative image of cremation in Korean society, which is striving to merge long-held traditions with modern conveniences, but the facility will also play an important role in meeting rising demand for cremation in Korea.

Koreans have long buried their dead in rounded tumuli in rural areas on hillsides or in fields and according to Confucian beliefs. But urbanziation and increased awareness about cremation has led more people to adopt the practice, experts say, in addition to the shortage of land for burial sites and the fact that it is easier to look after an urn than a grave.

Yet most countryside crematoria are insufficient in size and scale to keep pace with changing funeral practices. Many of these facilities are dark and cramped and offer subpar services.

Seoul Memorial Park was designed to address these problems and become a crematorium for the modern era. It currently handles 30 cremations per day using 11 cremators built with advanced technology, but hopes to increase that figure to 65 by extending its hours of operation in April.

Song Gwang-duk, the head of the Seoul city government’s crematorium team, said that the new space will go a long way toward meeting demand.

“With the 11 cremators at Seoul Memorial Park added to the 23 at the crematorium that relocated from Seoul to Gyeonggi, we expect the growing demand for cremation in Seoul to be met,” Song said.

The cremation rate has increased dramatically in recent years, from 27.5 percent in 1998 to 67.5 percent in 2010, and it was estimated to have reached 70 percent last year. Although that is still significantly lower than the almost 100 percent recorded in Japan, it is much higher than the 30 to 40 percent in the United States.

Park Tae-ho, the head of the policy research team at the Korea National Council for Cremation Promotion, said that the rise can be attributed to a number of factors, but the primary one was the heavy rains in August 1998 that destroyed hundreds of graves and damaged more than 4,000 at the national cemetery in Goyang, Paju, and at cemeteries nationwide.

“The public’s anxiety really increased after that,” Park said.

And there were other factors.

“Demand for cremation also grew after the death that same month of Chay Jong-hyon, the ex-chairman of SK Group, who left instructions for his cremation in his will,” Park said. “That year, there was also a campaign by Goh Kun, the Seoul mayor at the time, to encourage citizens to choose cremation over traditional burials.”

Yet despite the growing demand for cremations from 1998 to 2010, the number of crematoriums across the nation only increased from 45 to 52 in the same period. And most crematoriums are found in densely populated areas rather than in rural farming villages. There are nine areas nationwide where there are few or no crematoriums, including Gyeonggi, Gangwon and South Gyeongsang, meaning that people in these areas have to travel long distances for the service.

“Local heads of government should persuade residents that a crematoria is an essential facility,” Park said.

One barrier to the construction of crematoria has been opposition from area residents.

It took 10 years for construction on Seoul Memorial Park to begin and 14 years to complete because of protests from residents.

The city of Bucheon in Gyeonggi still doesn’t have a crematorium despite having a population of nearly 900,000. Discussions about building a crematorium began in 2000, but opposition from residents prevented the project from moving forward. Finally, Bucheon Mayor Kim Man-soo, elected in 2010, decided to scrap the plan and he made a deal with the Incheon city government to use its facilities instead. In return, Bucheon agreed to support Incheon in its hosting of the 17th Asian Gamesin 2014. Still, it is clear that this is a temporary measure, considering the growth of population in Bucheon.

The situation is similar in Daegu. Although Daegu’s cremation rate rose from 39.4 percent in 2002 to 67.2 percent in 2010, there is only one crematorium in the area. At the crematorium in Gomo-dong, Suseong District, the number of cremators increased from nine to 11 in the same period, though amenities such as a parking lot have been added.

Park Sang-tae, a member of the Daegu city council, said that he is aware of the problem, and has taken steps to remedy it, but that resolving the issue is difficult.

“It would not be easy to expand the existing crematorium, relocate it or build another one because people still think of crematoria as unpleasant,” he said.

Another problem is that most crematoria discriminate against people from outside the region in which the crematorium is located.

At the crematorium in Seongnam, Gyeonggi, nonresidents pay 1 million won ($891) for cremation, which is 20 times the price for local residents. The new crematorium in Seoul charges 700,000 won for nonresidents compared to just 90,000 won for citizens in the capital area. In addition, most crematoriums also give preferential treatment in scheduling to area residents, reserving the coveted morning time slots for locals and leaving nonresidents with the less desirable afternoon slots. For some families, this has meant they have to wait an extra day or two after the traditional three-day mourning period to cremate their dead.

Practices such as these have led many nonresidents to change their addresses before they die to a location in a district with a crematorium, according to experts in the field.

Meanwhile, it’s clear that what’s needed most is an increase in the number of crematoria in rural areas.

“The location of crematoria should be considered in tandem with long-term demand,” said Park Bok-soon, a professor in the mortuary science department at Eulji University.