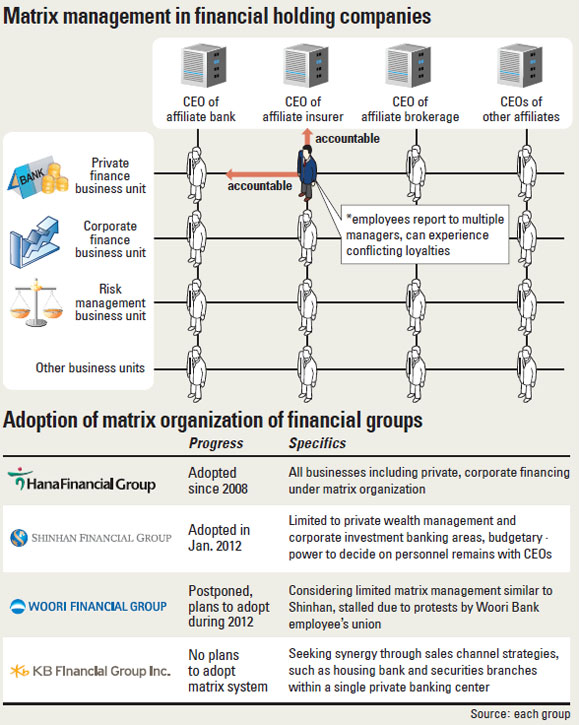 This followed Shinhan Financial’s move to set up yet another business unit on Dec. 13 to oversee private wealth management, which also merged two similar operations in the affiliate bank and asset manager.

“We have integrated what had previously been a separate customer classification between the bank and the asset manager,” said a spokesperson for the group. “This allows us to provide a one-stop shop for both the direct and indirect financial needs of the customer, and react flexibly to their needs.”

With this, Shinhan Financial has adopted a limited form of “matrix management,” which pools similar businesses in various affiliates into a single unit.

With three out of four major Korean financial groups having established, or currently pursuing, some form of matrix organization, debate remains on whether this is a good fit for Korea’s top-down financial industry, or whether it is a mistake driven by reckless ambition.

Having established their current governance structure led by financial holding companies during the 2000s, domestic financial groups like Shinhan and Woori recently begun seeking to merge some of these in the name of synergy. They hope to woo customers with a more complete arsenal of products and services from one location.

The matrix management concept has been around for decades in advanced economies such as the U.S., and some 77 of the world’s top 100 financial groups - with the exception of nine Chinese financial groups - has adopted such systems to disperse risk and enjoy other benefits, consulting firm Bain & Company said last year.

However, such a crisscrossing chain of command could double reporting duties and paperwork, cause confusion of loyalties in employees and other headaches.

In Korea, Hana Financial Group was the first to adopt a full-scale matrix management structure in 2008, threading together private financing, corporate financing and asset management, as well as adding a global operations business unit last year.

This has led to some improved performances, according to affiliate Hana Daetoo Securities. As the securities brokerage began working closely with Hana Bank’s corporate banking department, Hana Daetoo has seen its market share in underwriting corporate bonds increase from 0.8 percent in 2009 to 6.2 percent in 2011, rising from 21th to 7th place among domestic brokerages.

However, a number of drawbacks have also surfaced. An investigation by the Financial Supervisory Service (FSS) completed last September found that Hana Bank engaged in the widespread embezzlement of gift certificates for tourists, with some 60 branches defrauding 17.4 billion won ($15.4 million) over three years.

In notifying Hana Bank of the investigation results in December, the FSS noted that the underlying problem was a failure in Hana Financial Group’s internal compliance mechanisms due to an unclear chain of responsibility in the matrix organization.

“In a matrix structure, marketing, performance reviews and the power to make decisions on personnel lies with the head of the business unit, while internal control and risk management are the responsibility of the affiliated company’s CEO,” said a high-ranking FSS official. “This can lead to a blind spot in management.”

“One advantage of adopting a matrix [management structure] is that it allows for the merging of opinions and execution when [the organization] has many functions,” said KB Financial Group Chairman Euh Yoon-dae in November.

“However, a drawback is that the chain of power and of responsibility could fall into disorder. The success or failure of a matrix organization depends on the managers’ ability to manage.”

KB Financial Group has eschewed the matrix trend to focus on simply housing different affiliates’ sales channels in one location at nine of its branches.

“In order for a full-scale matrix organization to run smoothly, various affiliates must be similar in size and importance,” said a high-ranking official at Korea Development Bank. “However, 70 percent to 90 percent of domestic financial groups’ assets come from the bank in a number of cases.”

As such, the full-scale adoption of a matrix organization has proven difficult in the local financial industry. At Shinhan Financial, CEOs at affiliates are still empowered to make decisions on budgetary and personnel affairs once the new business units have been reorganized.

Woori Financial has been reviewing switching to a matrix structure for over a year, but opposition by Woori Bank’s employees’ union has pushed back the plan to sometime later this year.