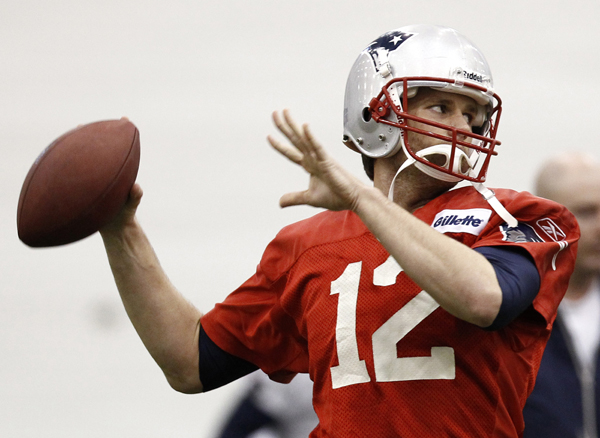 “Up front, somebody has to do something against somebody if we’re going to get to Tom,” Giants defensive end Justin Tuck said on Wednesday. “You have to hit these guys. You can’t allow time to stand and look upfield the whole game.

“You can’t let him be comfortable. It’s like pounding away at a rock. Eventually it’s going to break. We haven’t gotten Brady to the breaking point yet.”

Brady, capping the greatest passing season of his career, is trying to lead the Patriots to their fourth NFL title in 11 seasons. He would match the record for quarterback Super Bowl wins shared by Joe Montana and Terry Bradshaw.

But first, he must stay upright long enough to connect with his receivers.

“It wouldn’t be the Super Bowl if they weren’t talking about coming after me and knocking me down and knocking me out,” Brady said. “Our offensive line gets paid too and they do a great job of protecting me.”

Patriots coach Bill Belichick has milked the most of uncertainty about key blockers with injuries, including tackles Matt Light and Sebastian Vollmer and tight end Rob Gronkowski, a major receiving threat as well as a tough lineman.

All said they were well on Wednesday, although Gronkowski missed practice again and has not worked out since his injury 10 days ago. All are waiting to hear their status for Sunday.

“I don’t really pay much attention to that,” said Giants defensive end Osi Umenyiora. “Everybody is going to be themselves on Sunday. They’re going to be ready to play.

Belichick likes Light’s chances of blocking for Brady as he has for longer than any current tackle-quarterback combination in the NFL.

“I’m sure Tom has a lot of confidence working behind Matt as he always has,” Belichick said. “He’s tough. He’s smart. He has real good technique with his hands and footwork.”

The Patriots also figure to run some early screen plays and run off fake pass plays to try to keep Giants defenders from charging full speed at Brady.

“He’s going to do something early to try to get us out of our rhythm,” Tuck said. “Our backs are going to have to help us out. It’s going to be a total team effort to beat him.”

When the Giants have the ball, Tuck expects great things from Eli Manning, whose drive for the winning touchdown in the final seconds of the 2008 Super Bowl enabled New York to beat New England and deny the Patriots an unbeaten championship run.

“You have confidence in Eli that no matter what’s going on, he is going to get us in position for that game-winning score,” Tuck said. AFP