Lotte Hotel opened its second business hotel near Gimpo Airport on Dec. 8. Provided by the company


Due to the growing number of foreign tourists in Seoul, five-star hotels are building lower-priced hotels, or business hotels, in the hope of easing accommodation shortages in the capital. At least five new business hotels are planned for the next two or three years.

Lotte’s city hotels are based on a new concept it categorizes as “premium business.” According to international standards, they would be awarded four stars.

“As customers, including businesspeople and tourists, often do not use all of the additional facilities, we think the rooms and minimal services will be sufficient, which would enable us to lower prices,” said Cho Jae-han at Lotte Hotel. 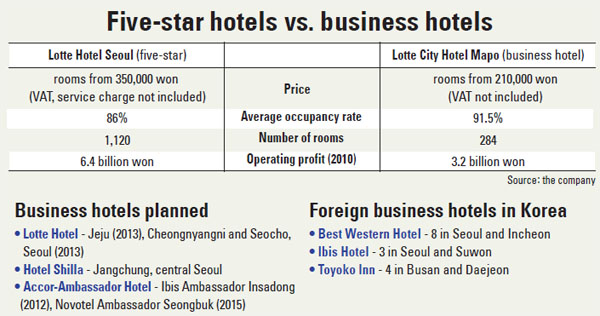 Lotte City Hotel Mapo has posted a strong performance for the last two years. Although it only has about one-fifth as many rooms as the Lotte Hotel Seoul in Sogong, central Seoul, it earned half as much revenue as the bigger five-star hotel in 2010, the official said.

According to the company, the room occupancy rate of the Mapo hotel rose by 8 percent from the previous year to hit 91.4 percent in 2010. The figure kept growing in line with the surging number of foreign tourists, posting 94.8 percent last year.

The company said that more than 80 percent of the business hotel’s customers are foreigners. About 60 percent of the total guests visit Korea on business trips, while around 20 percent are believed to be tourists, it said. Most of its guests are Japanese, followed by Chinese and Southeast Asians, Europeans and Americans.

Lotte is the first Korean hotel chain to jump into the local business hotel sector, which is dominated by foreign-based brands. According to the company there are a total of 17 business hotels in the country, including U.S.-based Best Western Hotel and France-based Accor Group. They mainly operate in Seoul and in large cities like Busan and Daejeon.

Having made a good start with its first Mapo business hotel, Lotte opened a second in the area near Gimpo Airport targeting businesspeople. The hotel group is planning to open two more in the next three years.

According to the industry, Hotel Shilla is also on track to build a business hotel in Seoul’s Jung District, where its five-star hotel is located. An industry official confirmed that the Samsung subsidiary is preparing to enter the new business.

According to the Korea Culture and Tourism Institute, 8.95 million foreign tourists visited Korea as of last year, surging by 10 percent from one year earlier.

Another reason is that subsidiary facilities and services at the hotels, such as wedding ceremonies and proms, are not highly profitable. Therefore, the hotels are seeking new revenue sources.

While the newcomers plot their entry or expansion in the business hotel market, existing players such as Accor-Ambassador Korea Hotel intend to open more branches.

The group opened a business hotel under its Mercure brand in southern Seoul late last year and plans to open two more in northern Seoul to help ease the accommodation shortage in the capital, it said.