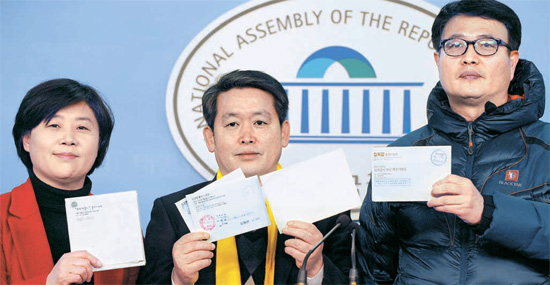 Prosecutors yesterday ended the probe of a member of the opposition Democratic United Party, accepting his claim that he wasn’t involved in the party’s vote-buying allegations.

Kim Gyeong-hyeop, a DUP member who was a former presidential secretary and who recently declared that he would run in the April legislative election, was suspected of allegedly distributing envelopes stuffed with millions of won to the party’s lawmakers at the leadership primary’s voting venue in December 2011.

“Based on scientific analysis and Kim’s testimony and others, we concluded that Kim’s claim that he distributed his invitations for the public ceremony is reliable,” an official from Seoul Central District Prosecutors’ Office told reporters.

“However, when it comes to the allegation that cash envelopes were traded in a bathroom, we still believe that there could be another suspect. So we will continue a probe into this allegation.”

A string of the party’s lawmakers also claimed in early January that they witnessed current chairwoman Han Myung-sook’s aides distributing money before the leadership primary. A DUP lawmaker told KBS that he saw some party members and lawmakers trading money in a bathroom of the voting venue on the day of the primary.

Prosecutors interrogated Kim based on the footage of 48 CCTV cameras showing Kim giving white envelopes to the lawmakers who had voting rights at the primary. In the footage, Kim was taking an envelope from an inside pocket of his coat and giving it to a party’s lawmaker. But Kim said they were just invitations to a party for the publication of his new book.

Shin Kyoung-min, spokesman of the DUP, lambasted the prosecution yesterday.

“The close of the investigation [into Kim] means that prosecutors wielded their swords in the wrong way,” Shin said. “We are concerned that they once again caused pain to the wrong people.”