The conservative ruling Grand National Party renamed itself yesterday the Saenuri Party in an attempt to redefine its image before the April 11 legislative elections. 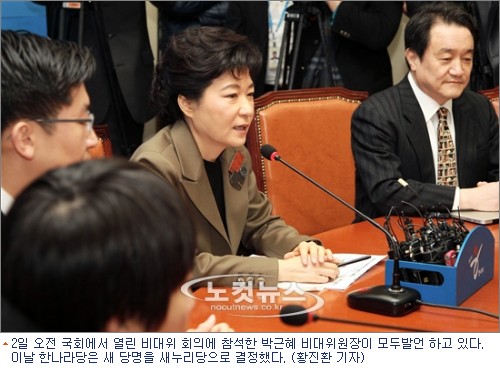 With yesterday’s decision, the conservative ruling party’s run under the GNP name will end after 14 years and three months.

“We have chosen the Saenuri Party among the recommendations made by the public,” said Representative Hwang Young-cheul, spokesman of the party. “Sae means new and nuri means a country and a world. It means a new world, a new country.”

Hwang said the new party’s name speaks for the people’s desires, adding that “It means a new Korea, an upgraded Korea and a new world of harmony and unity.”

For the time being, the party will use the Korean name only and make a decision on whether or not to use an English name in the future, according to a spokesperson.

Representative Park Geun-hye, interim head of the party, said the change of the party’s name is important, but it is more important for the party to make improvements under the new name.

The GNP received more than 9,200 recommendations from the public over four days since Jan. 27, and three final candidates were picked among them through publicity experts and senior party officials. The emergency council yesterday decided to go with the Saenuri Party.

According to Hwang, about 10 people proposed the name.

“I propose the Saenuri Party to express the GNP’s determination to reform and the dream for a hopeful future,” one applicant said in an e-mail. “It means a new future world that we will build together.”

The conservative ruling party said it will create a new logo to express the new identity.

Founded in 1997 as a merger of various conservative political groups, the GNP’s earliest formation was the Democratic Republican Party created in 1963 under Park Chung Hee, father of the current GNP’s interim head. The conservative ruling party changed its name to the Democratic Justice Party at the beginning of the rule of Chun Doo Hwan in 1980. It renamed itself again as the Democratic Liberal Party in 1990 through the merger of Roh Tae-woo’s Democratic Justice Party and two conservative parties led by Kim Young-sam and Kim Jong-pil. In 1995, the party changed its name to the New Korea Party ahead of the 1996 legislative elections to revamp its image. In November 1997, the New Korea Party finally became the Grand National Party.

The new name, according to party sources, was decided after a fierce debate at the emergency council. While some conservative members disagreed with the idea, Park concluded the debate by making the final decision, they said.

Jin Young-a, head of “Patrol Mom,” a civic group against school violence, gave up her post on the nomination committee on Wednesday for having lied about her political and school background, and the emergency council yesterday decided not to find a substitute to fill her vacancy.

With the decision, the nomination committee will operate with 10 members.

“We can be truly reborn as a new party by changing our thinking, people and name,” Park said yesterday.