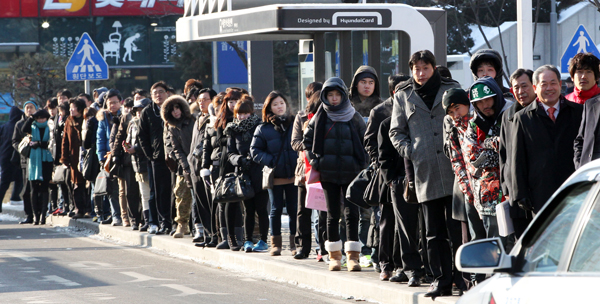 Chilly commuters stand in a long line for taxis in front of Seoul Station yesterday morning after subway line No. 1 was disrupted by a malfunction of a train probably caused by the cold. When the train was pushed down the tracks, one car derailed. Weather authorities predicted that today will only be a little bit warmer. [YONHAP]

The Korea Meteorological Administration said that the minimum temperature in Seoul yesterday was minus 17 degrees Celsius (1.4 degrees Fahrenheit) at 6:30 a.m., the lowest temperature in February in 55 years.

The agency said the cold snap is caused by air from the North Pole coming down to mid-latitude countries including Korea, China, Japan and Turkey. 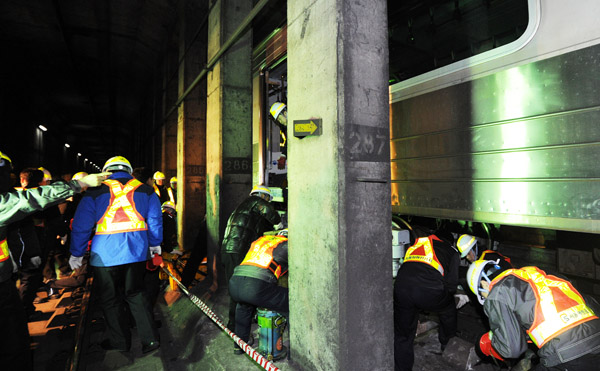 Workers try to put the derailed train back on the tracks yesterday near Jonggak Station on subway line No. 1 in Seoul. By Kim Do-hoon

Many schools in Seoul and Gyeonggi either closed their doors or sent kids home early.

The Seoul Metropolitan Office of Education said that 54 schools decided to close yesterday, and 140 shortened their hours. The education office said that the decision is left to each school’s principal.

Commuters using Seoul’s line No. 1 were stranded yesterday. The Korea Railroad Corporation said that a K602 train on line No. 1 stopped for 40 minutes for unknown reasons at 7:22 a.m. at Seoul Station before departing for Cheongnyangni Station.

At 8:08 a.m., said Korail, it had a second train push the stalled train to Seongbuk Car Depot after discharging passengers.

But in a section of track between Jongno 3-ga Station and Jongno 5-ga station, one of the cars derailed at 8:35 a.m.

Korail didn’t manage to clear it from the tracks until 11:52. The northbound lane from Yongsan Station and Hoegi Station was blocked for four and a half hours.

Korail said it assumed the electrical system of the train was knocked out by the cold weather.

“We will examine the train, but we assume that the cold weather influenced the battery performance,” Lee Gwang-hee, an official at the Ministry of Land, Transport and Maritime Affairs, told the JoongAng Ilbo.

“They neglected passengers for hours!” a 34-year-old passenger, Yoo Keun-choon, complained. “They didn’t even explain what’s going on. I’m already more than an hour late for work.” Some angry passengers yelled at officials dispatched to the scene.

“Bring the stationmaster and tell him to explain this before I break into his office!”

Another electrical system failed at Guro Station on line No. 1 around 8 a.m., shutting down platforms 3 and 4 of the station for two hours.

Korail said there was no disruption of service at Guro Station but passengers had to rush to different platforms.

According to the Office of Waterworks at the Seoul Metropolitan Government, a total of 73 water pipe ruptures were reported between Wednesday and yesterday afternoon in Seoul.

The waterworks office said it formed a round-the-clock emergency team of 600 maintenance workers and civil servants to help houses with problems.

Meanwhile, the Ministry of Knowledge Economy said that the country saw its highest electricity demand ever at 11 a.m., yesterday, at 73.83 million kilowatts.

The previous record was 73.14 million kilowatts at noon in Jan. 17, 2011. The ministry said they were monitoring demand closely but did not expect any power blackouts.