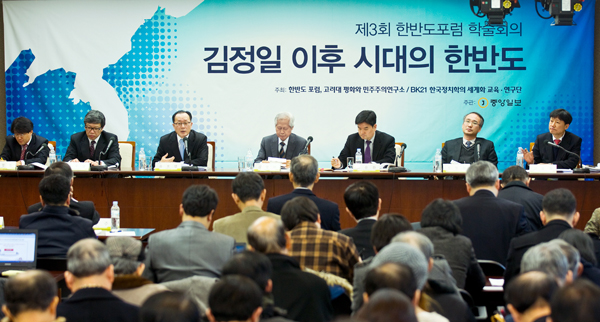 Eminent South Korean scholars on North Korea discuss the post-Kim Jong-il era at the Korea Forum for Peace, Prosperity and Unification, sponsored by the JoongAng Ilbo Unification Research Institute, yesterday, at the Korea Press Center in Seoul. By Kim Seong-ryong

Eminent South Korean scholars gathered to discuss the post-Kim Jong-il era yesterday and called for Seoul to recognize North Korea’s new leader Kim Jong-un as a partner in the dialogue.

At the Korea Forum for Peace, Prosperity and Unification, sponsored by the JoongAng Ilbo Unification Research Institute, Lim Hyuk-baek, a professor at Korea University, said the South’s current policies toward the North waver between flexible and firm and fail to read the geopolitical situation of the Korean Peninsula.

“Through a fundamental retooling of the policies and personnel vis-a-vis the North, our government should employ active and dominant diplomatic strategies [toward the North],” Lim said at the forum.

He said the North’s apologies for the two deadly provocations toward the South in 2010, including the sinking of the South Korean warship Cheonan, will come once both parties start dialogue.

“That it will have dialogue if North Korea apologizes first is putting the cart before the horse,” he said.

Paik Young-chul, chairman of the forum, agreed, saying the South Korean government does not provide a clear vision in relation to the North. “In order [for the South] to become more flexible, there is a need for building up diplomacy personnel [for exchange with the North] and utilizing private channels,” Paik said.

Park Myung-lim, a professor at Yonsei University, advised Seoul to propose a summit with Kim Jong-un similar to what Ma Ying-jeou is doing with China in a Taiwanese version of the Sunshine Policy.

Lee Shin-wha, a professor at Korea University, however, was pessimistic of the views and said the idea that the South should change when the North is not willing to change is a dangerous way of thinking.

“It is clear that North Korea is a partner for dialogue, but it is not right that we move past the Cheonan case, a terrorist act against a nation, now because Kim Jong-il died,” Lee said.

Chun Yung-woo, senior presidential secretary for foreign affairs and national security, also made a speech during the forum and said that the death of North Korean leader Kim Jong-il could present a chance for South Korea to improve inter-Korean relations.

“If we want to break away from the mindset and behavioral patterns of the Kim Jong-il era and blaze a trail for a new future, this will be the best opportunity we will ever get,” he said.

Lee Woo-young, professor at the University of North Korean Studies, whose expertise is on North Korean society and culture, said that the death of Kim means one less source of instability in the North. He said North Korean society runs on a self-sustaining system and the change of leadership does not threaten its collapse. He said better questions about North Korea are not whether or not it changes, but how it changes.

The Korea Forum was created to find alternatives to issues regarding the Korean Peninsula beyond the conventional binaries of either conservative and progressive, or pro-America and pro-China.