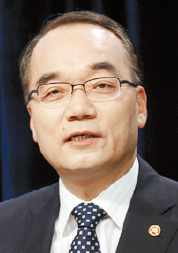 Minister of Strategy and Finance Bahk Jae-wan raised a strong objection yesterday to the city’s decision to ramp up public transportation fares, arguing that it could intensify inflationary pressure.

The capital’s municipal government, led by progressive-minded Mayor Park Won-sun, said on Thursday that it will raise transportation charges by 150 won ($0.13) on Feb. 25 to make up for increasing deficits caused by rising energy costs and the waiving of transfer fees between buses and subways, and on some subway lines.

“We are deeply disappointed with the decision, which came despite the fact that we have said many times opinion is divided on the matter,” Bahk said at a price stabilization policy meeting at the government complex in central Seoul.

The central government asked Seoul to postpone raising bus and subway fares out of concern that such an increase could put a further strain on the public as it deals with rising consumer prices and inclement economic conditions.

In response to Seoul’s request, the central government offered 800 billion won in compensation for the losses sustained by granting elderly people free use of public transport, as well as to help offset the burden of recent investments in subway facilities and new buses, Bahk said.

“But they [Seoul] should stop thinking that transfer all costs to the central government,” he added.

“Public transportation fares make up a large share of consumer prices and are closely related to the livelihoods of low-income households,” he said. “I am worried that [the hikes] could encourage other regional governments to follow suit.”

The government estimated that a 150-won hike could add 0.06 percentage points to the annual rate of inflation this year.

At present, compensation is only officially offered for railroad operations that connect different cities.