The debate over whether to introduce competition on high-speed railroads is heating up as the government aims to reduce costs and streamline the sector while Korail is fighting to maintain its monopoly.

An unprecedented hearing on the issue took place at a hotel in southern Seoul on Monday, but the two sides and their respective supporters remained divided amid few indications that a resolution will be able to be quickly reached.

The plan to introduce competition on the nation’s railways has raised eyebrows as Korail has enjoyed a privileged status since it was established as a public corporation in 2005.

Under the plan, the government intends to open new KTX railroads starting with Suseo Station, southern Seoul, from 2015. If competition is introduced and a private operator is selected, it will operate KTX services from Suseo to Mokpo, South Jeolla, and from Suseo to Busan.

The trains will run not only on the new railways between Suseo and Pyeongtaek, but also on existing high-speed railroads that connect to Mokpo and Busan. 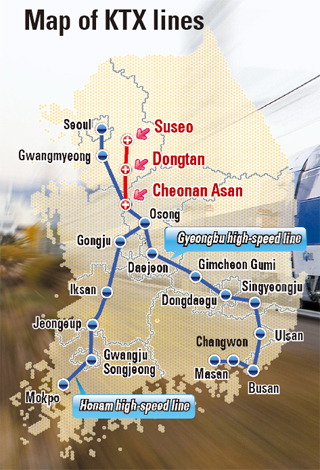 Even if a private company starts operating the new bullet trains, Korail will continue to operate services to Mokpo and Busan.

Although the media often describes this as the privatization of railroad transportation, there is at least one marked difference, as no assets will be sold off. As is the case with Korail, a new operator would have to lease railroads and pay fees to the government.

However, one key difference between the two is that Korail owns its train stations and KTX trains, whereas a new operator would be required to lease both from the government.

The proposed measure is being called for to combat the rampant inefficiency at Korail, according to the Ministry of Land, Transport and Maritime Affairs.

“It would be too much of a challenge to face competition from the private operator,” said Go Young-suk, a director of the ministerial department that deals with train operations. “If a competitor were to start offering a new service, or lower its prices, Korail would have to do the same.”

The new routes from Suseo to Mokpo and Busan are expected to be highly lucrative, and if a private company were to come in and take over the lines it would spell huge losses for Korail as it would lose the opportunity to cash in on the new routes.

Critics who oppose the idea describe it as an underhand way of favoring large enterprises.

He said the government’s plan of offering different terms and conditions to private bidders was unfair.

Explaining why trains and facilities can only be leased to a private operator, Bae Seok-joo, one of Go’s deputies at the ministry, said that unlike Korail, private operators can be changed after their contract expires. Private operators will also need to pay higher fees for leasing railroads, Bae added.

Those who support competition in the industry say it is time to end Korail’s monopoly, which has incurred huge losses. 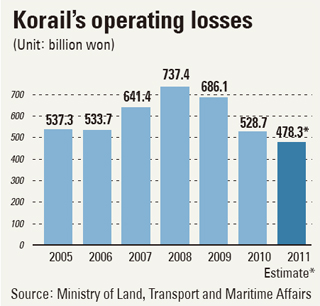 “Korail is monopolizing the KTX railway and reaped 300 billion won [$26.8 million] of profits on 1 trillion won of annual sales [last year],” said Lee Jae-hoon, a director of railroad policy and technology at the Korea Transportation Institute. “It has clearly benefited from its favored status.”

Meanwhile, the government said fares could decline by 20 percent if a private operator steps in, and that it will scrap the plan if this target cannot be achieved.

But critics fear that levels of safety - already a contentious issue after recent accidents involving the deaths of several railroad workers - may be compromised by the new move. Countering this, the government pointed to the fact that a number of subway lines in the capital, notably the Shin Bundang Line and Line No. 9, are already run by private companies.

Furthermore, proponents draw attention to the fact that there were few negative effects or safety problems when competition was opened among domestic airlines and a second carrier added over two decades ago.

“There were similar debates before the government awarded a second license to Asiana Airlines to operate an airline in 1987,” Bae said.

“Even at that time, those who opposed a second airline said the same thing - that it would jeopardize the safety of flyers.”

Bae said that government may ultimately fail in its attempt to privatize the rail industry, but that its move to introduce competition will both succeed and pay dividends.

“Look at the airline industry. After multiple players started competing in the air, their service improved and fares dropped,” he said.

Such competition has been successfully introduced in developed countries such as the United States, Britain, the Netherlands and Japan.

Korail said its losses result from operating unprofitable lines and insufficient levels of government compensation, and that it is gradually improving its bottom line.

The government has been compensating Korail for its fare-derived losses, which are estimated at 304 billion won this year. They largely stem from the discounts offered to senior citizens and from its unprofitable routes that connect to remote areas.

The ministry intends to open bids for a private operator for the new KTX lines in April, just after the national elections scheduled for that month.