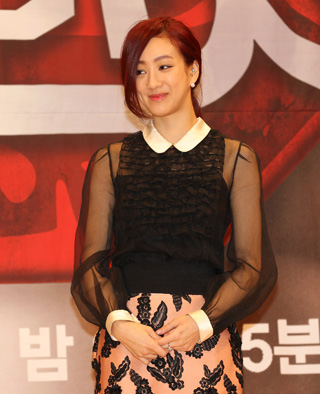 If actress Jung Ryeo-won ever wanted to pursue a career outside of entertainment, she could make it as an artist, as the sale of her two paintings has proved.

The two pieces, which the entertainer donated to Apex law firm’s end-of-year charity auction, sold for 1 million won ($892) each.

The star’s agency confirmed Feb. 3 that Jung was asked to donate to the collection and gladly submitted the pieces “Purple Refrigerator Between Passions by rye” and “u and me-entwined by rye.”

According to a representative from Jung’s agency, “she has never been trained in fine art; she likes to express herself through drawing in her spare time. Those around her have always responded well to her artworks.”

Jung is currently starring in the SBS drama “Salary Man Cho Hanji.” She also starred in “Never Ending Story” alongside actor Uhm Tae-woong, which opened in cinemas on Jan. 19.

Jung made her debut with girl group Chakra in 2000 and rose to fame for her role in the comedy-drama “My Lovely Sam-soon” in 2005.