Throw the humidifier out and go herbal

Throw the humidifier out and go herbal 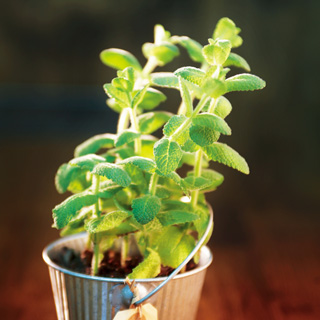 Herbs are natural humidifiers in addition to providing other health benefits. By Kim Su-jeong

Herbs have been replacing home humidifiers in recent months following a recall of six sterilizers used to clean the devices late last year.

The sterilizers came under investigation after it was found that certain sterilizers for humidifiers were the possible cause of death for 28 people who died of pulmonary fibrosis. The government confirmed yesterday that two ingredients in the sterilizers cause long-term damage to the lungs.

Since the incident first sparked worry about humidifier safety, people have been turning to herbal concoctions as a way to mitigate the dry conditions at home as winter drags on.

According to experts, most herbs are effective in controlling indoor humidity. But geraniums and the vicks plant, which is similar to Swedish ivy and smells like the over-the-counter liniment from which it gets its name, are said to be especially effective for this purpose. Both plants were recently designated as herbs for home humidification by the Rural Development Administration, with the vicks plant ranked as No. 1.

Humidifying plants like these supply moisture by transpiration, a process similar to evaporation in which water is emitted into the air through the stoma on the underside of the leaves, raising the humidity in a room by up to 40 percent. The plants also purify the air by absorbing pollutants through their roots. 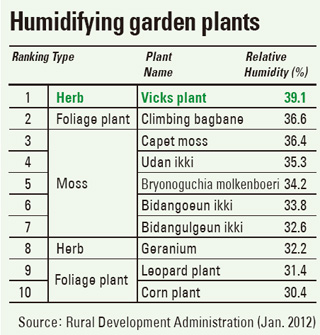 The aroma of herbs like these is not only appealing but also has health benefits, according to Jo Tae-dong, a professor in the Environmental Landscape Architecture Department at Gangneung-Wonju National University.

“An herb’s fragrance molecules move to organs and tissues through the nose, pores and capillaries,” Jo said.

And according to Oh Hong-geun, the director of the Neuropsychiatry Department at Sukjunghollen Hospital in Gochang, North Jeolla, herbs also have aromatherapeutic benefits for calming both mind and body.

“The range of treatments incorporating herbs has extended to include treatments for insomnia and depression,” he said.

Color is also a factor in herbal therapies as the green hues are said to play a role in releasing tension, lowering blood pressure and refreshing the mind. Placing a pot of herbs next to the computer is said to help relieve fatigue and tension around the eyes.

Of the approximately 3,000 species of herbs cultivated globally, there are about 10 that are easy to purchase and cultivate in Korea.

Lavender, which is known for its slightly sweet aroma and is often used in aromatherapy and beauty products, is effective in relieving stress and anxiety. Placing a lavender plant in the bedroom can help promote sleep.

Rosemary and mint are known to boost brain function, making them ideal for anyone doing intensive reading or research. Rosemary has a strong fragrance that helps a person shake off sleepiness and improve concentration and memory. Mint, whose main component is menthol, also drives away sleepiness and clears the head.

Lemon balm and coriander are perfect for when you’re feeling lethargic and need a pick me up or when you need some extra stamina. Lemon balm helps alleviate nervous breakdowns and depression, and coriander, which has a strong flavor that some people like and others don’t, helps to relieve the pain caused by rheumatism and arthritis. It is also known to alleviate menstrual cramps.

But the vicks plant may be the best herb to place in a dry living room in the winter. It is ranked as the No. 1 natural humidifying plant and is easy to find in the market. It is known to help purify the blood and activate cells while also relieving the symptoms of colds and allergies.

Another good plant for the home is thyme, which is effective in sterilization and deodorization, making it ideal for use in the kitchen. Other herbs that are recommended for personal use include basil, which some say helps keep drivers alert, and hyssop, which could help alleviate the symptoms of respiratory diseases such as flu and bronchitis.

Herbs should be kept in the shade and only exposed to direct sunlight for three to four hours. When watering the plants, make sure that the water seeps through to the bottom of the pot.