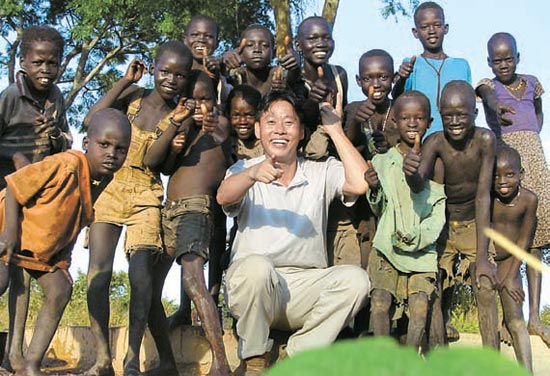 Though Father John Lee has passed away, his legacy remains.

Lee’s lifelong wish was that “what is done for the most unworthy be the same as what is done for me.” His wish will now be carried out through a hospital named after him.

John Lee is the baptismal name of Father Lee Tae-seok (1962-2010). He died of colon cancer at the age of 48 in January 2010. In life he was renowned for his humanitarian work in Sudan.

The Ministry of Strategy and Finance said on Monday it will build the John Lee Memorial Hospital and Medical School in Juba, South Sudan. It will be the first modern general hospital and medical school in the country. The construction will be financed by the Economic Development Cooperation Fund through a low-interest loan established to support economic and industrial development in underdeveloped nations. The loan was founded in 1987 and managed by the Export-Import Bank of Korea.

Construction of the hospital will start at the end of the year. The Ministry of Health and Welfare will provide education and hospital management programs. The Finance Ministry will collect donations and use the money to build a school and a state-run health center in a village for leprosy patients near Tonj, where Lee used to live. The ministry will also send volunteers to the village. Donations will be collected under the name of the “Lee Tae-seok Love Sharing Fund” and details on how it is used will be made public on the Web (www.smiletonj.org).

Father Lee laid the foundation for the hospital. He graduated from medical school at Inje University and was ordained in 2001. Afterward, he traveled to Tonj despite a civil war in the area. In Tonj, he was a mentor, doctor, educator and architect. He built 12 temporary hospitals himself. He fought malaria and cholera and even treated leprosy patients.

After he died, a TV documentary about his life and work was produced in April 2010. At the end of last year, “Don’t Cry Tonj” was viewed at the Vatican.

The Society of St.Francis de Sales, with which Lee was associated, has said it will translate the film into Spanish and screen it around the world.