Despite branch closure, baker vows to carry on

Despite branch closure, baker vows to carry on 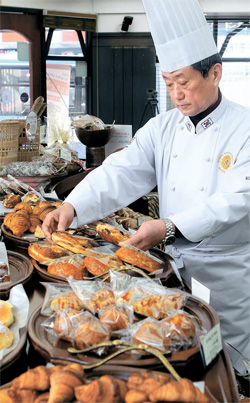 Kwon Sang-bum puts bread on display at the Hongdae branch of Richemont Bakery, on Jan. 30, a day before it was shut down. He has run the place since 1983. By Kim Tae-sung

At a time when bakeries can be found around the nation, many people still make the trek to Richemont Bakery, whose cream puffs and patbingsu (an adzuki-bean ice dessert) continue to garner attention.

Since 1983, the bakery chain has been providing customers with gourmet pastries made by Kwon Sang-bum, who is one of eight renowned patissiers in Korea.

When he first started thinking about the business, many people suggested that he create a franchise or sign a contract with a department store, but he refused.

“If I had to make bread on someone else’s orders, I would feel like I had no future,” Kwon said.

Yet despite all the efforts Kwon has put into Richemont Bakery, it was pressured to close its Hongdae branch on Jan. 31 because the landlord signed a new contract with coffee chain Angel-in-us, which is owned by Lotte Group.

But it wasn’t the first time Kwon has been under pressure to save the business. Five years ago, he successfully defended the branch by doubling the key money and monthly rent so the landlord wouldn’t give the space to the owner of a competing franchise.

Richemont Bakery is named after a Swiss bakery institute and has grown to include both the bakery, which has branches in Sungsan District and at Ewha Womans University, and a pastry institute with an annual revenue of 3.5 billion won ($3.1 million).

The institute has produced almost 400 students and Kwon is still full of energy for teaching more.

“It wasn’t easy for me to learn bread making and I want to share my skills,” Kwon said. “I’ve learned to do one thing passionately and this is what I will teach until I die.”

Kwon was a student when he first tasted bread at his uncle’s bakery in North Gyeongsang, which inspired him to become a baker.

“I’ll never forget the first bread I tried,” Kwon said. It was, he said, “something like salvation.”

Kwon’s father passed away when he was just five years old and his mother was left to raise Kwon and his two sisters.

“I promised myself then that I would pass on skills, not poverty, to my descendents,” Kwon said.

“I wasn’t treated well when I was studying to become a patissier, but nothing could stop me from learning,” Kwon said.

All of his effort paid off and in his 20s, he got jobs at Punynyeon Bakery and Napoleon Confectionery Shop.

These experiences ultimately led Kwon to establish Richemont Bakery, which is now one of the most well-known bakery chains in Seoul.

It was hard for Kwon to shut down the branch since he has put 30 years of his life into the business.

But he said that people’s support has helped him get through the hard times.

And despite the disappointment of having to close the shop, he said he is ready to devote the rest of his life to building up the business.