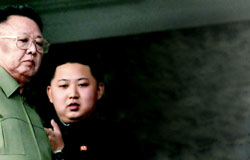 Their trip was belatedly disclosed after one of the travelers told a online news site about his experience in the North. Government officials confirmed that the inter-Korean border was opened for the crossing of the three before the highly publicized trips of two other groups from South Korea.

Three representatives of the Unification Church, including its president Moon Hyung-jin, crossed the inter-Korean border on Dec. 24, 2011. Moon, the youngest son of the church founder Moon Sun-myung, was accompanied by Park Sang-kwon, president of the inter-Korean venture Pyeonghwa Motors, and Joo Dong-moon, president of The Washington Times. Both companies are owned by the Unification Church. Park told Tongil News about the trip and a report was published in the paper Thursday.

According to the Tongil News report, the church delegates crossed the demilitarized zone on Christmas Eve to reach Pyongyang through Kaesong and offered incense at Kim Il Sung Plaza. On Dec. 26, they offered condolences at the Kumsusan Memorial Palace where the late North Korean leader’s body was laid out in a glass coffin.

The three met with new North Korean leader Kim Jong-un and attended the funeral ceremony on Dec. 28 and performed other condolences the following day.

Although the North’s state media reported their trip at the time, it was believed that they had traveled to Pyongyang via China.

After Park spoke about his trip to Tongil News, Seoul officials admitted yesterday that they had allowed them to cross the inter-Korean border on Dec. 24. Any cross-border trip requires government authorization.

Their trip took place two days before mourning visits by the widows of President Kim Dae-jung and Hyundai Group Chairman Chung Mong-hun. The former first lady, Lee Hee-ho, and Hyundai Group Chairwoman Hyun Jeong-eun crossed the heavily guarded inter-Korean border on Dec. 26 and came back the next day. While their trips were publicized, the three Korean-Americans’ trip was not.

No other South Koreans are known to have been allowed to visit the North at the time.

A senior government official said yesterday that the three delegates of the Unification Church are American citizens and they could have traveled to the North through other countries. “But they made the request to go from the South, and the government accommodated it,” he said.

The revelation came a day after the North demanded that the South apologize for its attitude toward Kim’s death as a precondition to resuming bilateral talks. The South did not send an official delegation to the North after Kim’s death. Seoul issued a statement on Dec. 20 expressing sympathy to the people of North Korea, not the North government.