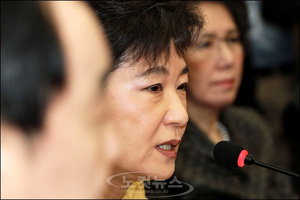 The leadership of the ruling party is being challenged by lawmakers questioning some of the reform measures of interim leader Park Geun-hye, including the new name she chose for it.

The emergency leadership of the party announced Thursday its decision to rename the party in a move to revamp its image ahead of April legislative elections.

The reformist lawmakers yesterday criticized the leadership for having made a decision without consulting the party’s lawmakers and chapter heads.

“When a structural change was proposed earlier to give more power to the floor leader, the members of the party agreed that it was not something that the emergency council can decide alone,” Nam said. “And I think the party’s renaming requires listening to the members’ opinions.”

Before the press conference, Nam told reporters that the name itself was not the problem. “The more serious problem is the lack of democratic process,” he said.

Not only the reformists, but a key Park loyalist complained about the new name. Representative Yoo Seong-min, Park’s former chief of staff, demanded a lawmakers’ caucus to be held to discuss the new name.

“The new party name lacks identity,” he said. “I asked floor leader Hwang Woo-yea to hold a lawmakers’ meeting. The party’s name is an extremely important issue for an election, and it is wrong for the emergency council to make a decision alone.”

Hwang said yesterday that a lawmakers’ caucus can be held if there are significant demands.

Sources inside the party said some members of the emergency council complained that the name Saenuri failed to impart a new vision or identity. “Sae” means new in Korean and “nuri” means a country or a world.

“I picked the best name to satisfy the people from among the recommendations,” said Jo Dong-won, a copywriter and publicist who is in charge of public relations and planning for the party. After receiving recommendations from the public, the emergency council held a fierce debate over the new name. Park made the final decision, supporting Jo.

In addition to complaints about the new name, some lawmakers also complained about Park’s leadership. They said a scandal over a nomination committee member was an example of the shortcomings of her leadership, which is too secretive.

Jin Young-a, head of “Patrol Mom,” a civic group against school violence, gave up her post on the nomination committee Wednesday after being caught lying about her background.

Representative Lim Hae-kyu, a reformist, said yesterday the scandal was the result of a back-room process of selecting the committee members.