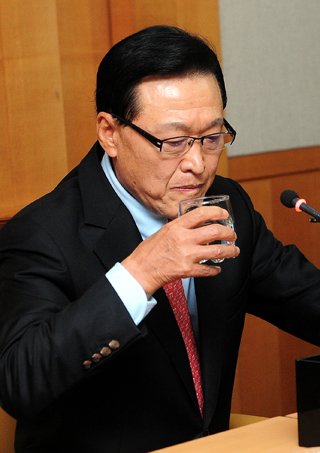 The hush-money scandal in the Korea Football Association continues to snowball.

Yesterday, the Korean Olympic Committee said it had completed an audit on the association and demanded further investigation into an employee who was fired and paid 150 million won ($134,000), allegedly to shut up about corruption within the organization.

Cho Chung-yun, president of the KFA, held a press conference at the Korea Football Association Hall in central Seoul yesterday and said the association has decided to ask for a criminal investigation into the employee, who is only identified as A., and to get back the 150 million won it paid him on Dec. 31.

“I humbly accept the inspection result of the Korean Olympic Committee,” said Cho. He said he was “deeply ashamed as the president of the KFA.”

The scandal surfaced when A, who worked in accounting for the KFA since 2006, was caught stealing football shoes last November. Cho ordered Kim Jin-kook, executive director of the KFA, to conduct an investigation into A and a special investigation team was organized on Dec. 9.

The team discovered that A. allegedly embezzled a total of 24.89 million won in 2009 and 2011 by converting reward points from the KFA’s corporate credit cards into gift certificates.

A was fired as of Dec. 31 and repaid the 24.89 million won. But then the association paid him 150 million won for “retiring at an official suggestion.”

The association’s labor union protested the payment and disclosed it to the public.

According to the Korean Olympic Committee, which oversees the KFA, it discovered a written agreement signed by A and Kim Jin-kook that states: the KFA will pay a settlement of 150 million won to A; A will remain silent about things happening inside the KFA; and the KFA will not raise any further issues concerning A.

Kim stepped down on Jan. 27 after the scandal broke

The KOC demanded the association also investigate Kim, but Cho said it would be “inappropriate” to sue him.

Cho denied allegations of slush funds run by the association. “I can categorically tell you that the KFA has never committed any accounting wrongdoings,” he said. “The claim that we tried to cover up bigger corruption by hushing up the employee is not true.”