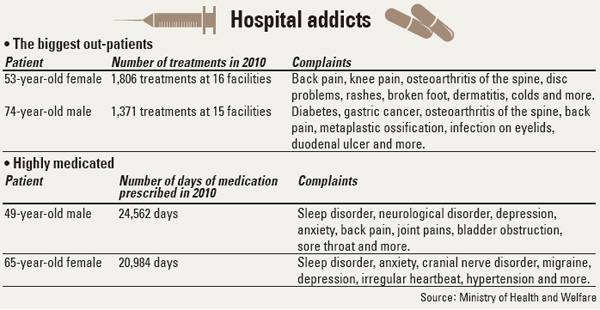 Most people avoid going to the doctor. But there’s a small group who enjoy it, can’t get enough of it, and in Korea, an addiction to medical treatment is cheap thanks to the national health insurance system.

One of the worst cases, according to the Ministry of Health and Welfare and the National Health Insurance Corporation, is a 53-year old woman in North Jeolla who sought medical treatment 1,806 times in 2010.

She says she has problems with her back and knees, and spread out her visits among 16 hospitals and clinics. She also got treatment for hives on 140 occasions and for colds 63 times.

Excluding Sundays and national holidays, she averaged six visits to the doctor a day.

Each visit cost 5,000 won ($4.50), which is cheaper than visiting a jjimjilbang, or public bathhouse.

The Health Ministry and the National Health Insurance Corporation disclosed Wednesday that there are 520,000 people in the country who seek medical service more than 100 times a year, according to an analysis of health insurance data between 2008 and 2010. On average, they spread their visits among 10 different medical institutions.

Each of those people received medical treatment worth 3.73 million won, but thanks to insurance, only had to pay 740,000 won out of their own pockets.

And they were prescribed a whole lot of medicine. In 2010, 1,644 people received prescriptions for over 2,000 days worth of medication.

The National Health Insurance Corporation calls these patients “medical treatment shoppers.” Their behavior is also known as hospital addiction syndrome or Munchausen syndrome. It is most common among the lonely and the elderly.

A 66-year old woman in northern Seoul used her health insurance a whopping 21,920 times in 2010, going to the hospital 936 times and buying prescription drugs 20,984 times. She received prescriptions for 10 different maladies including a sleeping disorder and migraines.

“Even patients with chronic diseases such as high blood pressure or diabetes usually go to the hospital only once a month,” said Lee Seu-ran, an official from the Health Ministry’s medical insurance policy division. “Going to the hospital more than eight times a month is abnormal.”

The elderly, aged 65 years or older, account for 63.3 percent of the “medical shoppers.” Over 334,000 seniors seek medical attention more than 100 times a year. Since 2007, the fee for seniors seeking normal medical treatments at local clinics is 1,500 won.

Of the 334,000 senior patients, 38 percent claim to suffer from arthritis or musculoskeletal disorders, and the most common treatment is physical therapy.

Currently, there are few disincentives to going to the doctor as often as you like. People who receive the government’s basic living subsidy are limited to certain hospitals and also may have to pay extra for treatment. Otherwise, there are no limits on how often regular patients can use their medical insurance.

The National Health Insurance Corporation estimates that if the number of medical treatment shoppers was cut in half, it would be able to save 80 billion won.