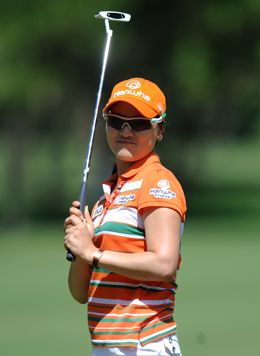 Ryu So-yeon reacts after she misses a putt on the seventh hole during the final round of the Australian Ladies Masters at the Royal Pines in Queensland, Australia, yesterday. [AFP/YONHAP]


Korean golfer Ryu So-yeon failed to clinch her first title of 2012 as she fell one shot short of the Netherlands’ Christel Boeljon on the last hole of the Gold Coast RACV Australian Ladies Masters yesterday.

At Royal Pines Resort in Queensland, Australia, Ryu entered the final round with a three-stroke cushion but couldn’t maintain the lead down the stretch. The U.S. Open champion shot an even-par 72 in the final round, while Boeljon closed with a 4-under 68 to finish the season opener of the Ladies European Tour at 21-under 267.

Ryu, the 2009 runner-up, again tied for second with compatriot Kim Ha-neul and Italy’s Diana Luna, who both shot 5-under 67 on Sunday to finish the tournament at 20-under 268. Lee Bo-mee also finished inside the top 10, sharing sixth place with Felicity Johnson of England at 15-under 273.

Ryu, 21, was dubbed as a strong candidate to claim the title not only because she went into the final round with a three-shot lead, but also due to her impressive performance in the second round, during which she fired an 11-under 61.

But Ryu didn’t have the smooth ride she enjoyed in previous rounds yesterday. In the first nine holes of the final round, Ryu just went even-par with a bogey on the par-4 fourth and a birdie on the par-4 ninth.

But her drought continued on the back nine as Boeljon climbed the board slowly and finally leveled with the Korean on the par-4 13th with a birdie.

The 24-year-old from the Netherlands already had two birdies before the 13th and sunk a three-meter birdie putt to tie the score at 20-under. Ryu restored the lead briefly after Boeljon made bogey on the next hole, but it didn’t last long after she bogeyed herself on the par-3 16th.

While Kim and Luna hoped for an extra-hole playoff, the fate of the golfers was decided on the par-5 18th.

Ryu got aggressive on the last hole, but her tee-shot went into the rough and her second shot turned out to be worse, landing in a bunker on the left side of the green. She got out of the sand trap, but her third shot went six meters from the mark, and she would eventually miss her chance at a birdie.

As Ryu struggled, Boeljon played a near-perfect hole. She made it onto the green in two shots and hit her eagle try about 1.2 meters away from the hole.

The ensuing birdie putt ensured her second victory on the LET. Boeljon had previously won the Turkish Airlines Ladies Open last May.

The result was another unfortunate result for Korean ladies at the Australian Masters.

Since the tournament started in 1990, Koreans have now had six runner-up finishes - although Yang Hee-young did win the tournament in 2006 at the age of 16 as an amateur.

Meanwhile, Korean-born New Zealander Lydia Ko, the youngest ever female golfer to win a professional event at age 14, tied for 32nd after finishing at 6-under 282.