Last August, Lee Dae-gun, 27, won the top prize at a competition sponsored by the Korea Credit Guarantee Fund for budding inventors. His invention: an alarm to prevent bicycle thefts that doubled as a headlight. Lee wanted to start a company to make the gadget and put it on the market. Potential investors attended the competition and congratulated him on his idea. But none offered an investment. “Bring it to us after production,” they told Lee. “We’ll sell it for you.”

Lee abandoned his idea of starting his own company and is looking for a regular salaried job.

Jang Hyo-seong, 27, won the same competition in 2009. His invention was ingenious software to help people who lost portable USB drives and the data on them. If a stranger found the lost USB drive and plugged it into their own computers, the software would automatically send the files through the Internet back to their original owner and destroy them on the USB drive.

Armed with his idea and his prize, Jang knocked on the doors of numerous venture capital companies looking for start-up money. They all rejected him. Their usual line: “We only invest in start-ups that are somewhat safely settled down.” 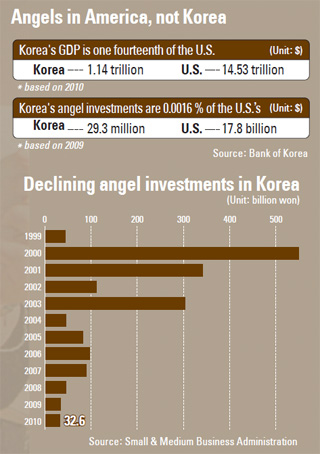 In other words, companies that were beyond the start-up phase. Jang scrapped his hope of establishing a company and is a salaried employee at a medium-sized company.

Young Koreans with bright ideas and dreams of becoming entrepreneurs are suffering from an acute investment drought. When the JoongAng Ilbo’s Special Reporting Team contacted 20 individuals or teams who won prizes at nationwide invention or start-up idea competitions from 2009 to 2011, only one team said they received an investment, and that was from a relative of one of the members. Others said they borrowed money from relatives to start up and manage their businesses, while five said they gave up on starting a business altogether.

Korea has a dearth of “angel investors,” usually affluent individuals who provide capital for a start-up, often in exchange for convertible debt or equity.

According to the Small & Medium Business Administration, angel investment in 2010 in Korea amounted 32.6 billion won ($29.2 million).

In the U.S., the amount is nearly $23.26 billion per year. In early 2000, angel investment exceeded 500 billion won in Korea but shrank drastically after the dot-com bubble burst.

This is why young entrepreneur wannabes opine that there are no angels in Korea.

There are several angel investment firms, including Primer and Softbank Ventures Korea, but their size is still insignificant. Venture capital companies generally avoid making angel investments in Korea. This makes the government’s encouragement of young Koreans to start up businesses, a way to tackle high unemployment among the youth, a nonstarter.

According to a survey conducted by the Korea Research Institute for Vocational Education and Training of 800 college students from 27 colleges throughout the country, 67 percent of the respondents said they “planned to start up a business.” If the recent experience of other young people is an indicator, not many will succeed.

Choi Jong-ki, 29, won the first prize at the Korea Credit Guarantee Fund’s contest in 2010 and started an online survey portal site, Dooit Survey. Choi has seven employees, and he expects his company’s sales for last month to reach 30 million won. He thinks his company has reached the “infant business” stage.

But that infant had to learn to sprint before it could crawl.

After Choi won the Korea Credit Guarantee Fund contest, he thought the fund would be interested in lending him money. But when he applied for a loan, it said he needed to submit “proof of profit.”

“I never thought it would be difficult to receive a loan from the group that organized the competition,” Choi said.

He managed to make some money on another business, and the Korea Credit Guarantee Fund gave him a loan. It wasn’t enough to start up the business.

By tinkering with his idea, Choi entered more competitions and started a company with the award money (60 million won), the loan and money borrowed from relatives.

Consulting firms have sprung up to help entrepreneurs get some government funding.

Naver’s Young Entrepreneurs’ 1,000 Project Consulting Web site gives advice on how to apply for 500,000 won to 1 million won per month for a year from the Seoul Metropolitan Government. If the applicant fails to receive the funding, it refunds most of the fee charged.

Some budding entrepreneurs are even looking abroad for investments.

Oh Yu-jin, 19, who won the first prize at a competition organized by the Small & Medium Business Administration last year with a cup that automatically warms up coffee that’s gone cold, said she didn’t even bother looking for an investor in Korea.

“I knew from the beginning it’s practically impossible to get an investment with just an idea in Korea,” said Oh, who recently came back from Silicon Valley. “So I turned to angel investors in the U.S.”

“I hope the government will help us to compete in international competitions or exhibitions, which would allow us to meet potential foreign investors,” said Jo Hun, 28, who started a product design business in September 2010.

“Korea is a country that does not appreciate entrepreneurs who fail,” said Park Jae-hwan, business administration professor at Chung-Ang University.

“If the government don’t come up with an epoch-making measure to expand angel investments, numerous young people who fail will be loathe to try a new business,” he said. “And it’s not easy for them to find regular salaried jobs either.”