Chris Golightly of ‘Superstar K’ defends himself, says he is in Korea

Chris Golightly of ‘Superstar K’ defends himself, says he is in Korea 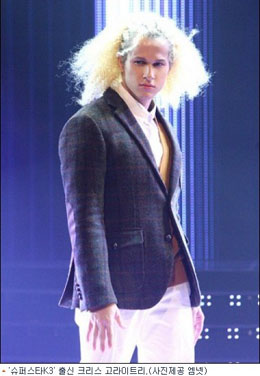 Chris Golightly, the U.S. contestant from the Korean reality show “Superstar K,” has lashed out at a group of women who claimed the singer sexually assaulted them. Golightly took to his Facebook page on Thursday to defend himself, warning that if the women didn’t reveal “the truth,” he would release pictures of them online. He also dismissed rumors that he had left for the U.S.

“I did not leave Korea. .?.?. Show your faces, did I really hurt you? You lying trash. I can’t believe people believe such trash. People write and make up stuff then vanish, and you believe it .?.?. All this is defamation .?.?. only attack me? Because I’m a foreigner? wtf. I’ve been nice to everyone ... and this is how I’m treated,” Golightly wrote on Facebook.

Asia Economy had reported Jan. 30 that the entertainer was leaving Korea for the United States based on a status update on his Facebook page posted earlier that day.

The 10 alleged victims are considering legal recourse, claiming they suffered from mental distress as a result of Golightly’s actions.