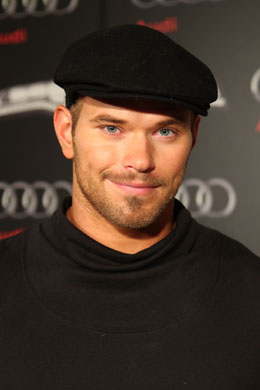 INDIANAPOLIS, Indiana - Earlier in the week, some criticized the supermodel and wife of New England Patriots quarterback Tom Brady after an e-mail she reportedly sent to friends and family encouraging them to pray for her husband’s success in the Super Bowl pro football championship game against the New York Giants was leaked.

“I found that very endearing,’’ Kellan Lutz of the “Twilight” saga said about the e-mail. “Very sweet to have a wife do that for her husband and give that positive energy. I think we all need that in the world. To listen to the news broadcasters .?.?. be negative towards that, I think it is really [bad].’’

“They have a great team. Solid team,’’ he said. “I fell in love with Tom Brady. Met him once. Really great guy, and they have a really solid team. Even if Tom isn’t playing, their team is solid.’’

The actor may be known for his rock solid body, but says it dwarfs in comparison to the National Football League players.

“All of these guys are definitely big guys,’’ Lutz said with a smile. “I feel small. It is a weird feeling because in Hollywood you work with actors who are small. I love sports. I love football.’’

Morrison said he’s rooting for a Giants win: “I lived in New York for 13 years.’’ He also said he was enjoying the energy in the city: “They’re real die-hard football fans here.’’

Audi wasn’t the only party in Indianapolis on Friday night. There were several celebrity soirees, including one thrown by Playboy, where Green Bay Packers quarterback Aaron Rodgers hung out in the VIP area as lingerie-clad acrobats dangled from ropes from the ceiling. AP