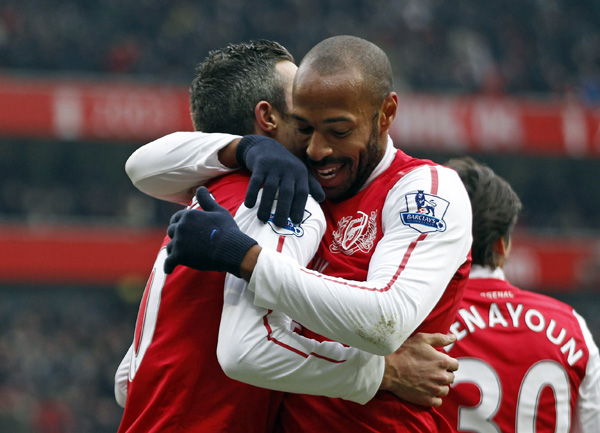 LONDON - Arsene Wenger believes Thierry Henry’s stoppage-time goal in the win over Blackburn will be remembered as a “special” moment if it turns out to be his last strike at the Emirates Stadium.

Henry, who returned to Arsenal on loan, is scheduled to head back to New York after away matches against Sunderland and AC Milan, so wrapping up the scoring against Rovers could have come in the last minute of his final home game.

Robin van Persie had scored a hat trick, Alex Oxlade-Chamberlain netted twice and Mikel Arteta also found the back of the net before Henry struck to complete a 7-1 win, their biggest Premier League win at the Emirates.

“With Thierry going back to the States he played, normally, his last game at the Emirates, and in the last minute, he scored his goal. That is really something special,” Wenger said.

“It has been very positive, everyone listens to his advice as he’s delivered here, and they all want to deliver. He’s respected.

“He is still not away yet, normally until after the Milan game. Sunderland and Milan are two massive games.”

Wenger insisted he has not looked at extending Henry’s loan yet for him to be involved in the clash against Tottenham.

His return to the club has coincided with emergence of Oxlade-Chamberlain and has also seen Theo Walcott return to his best form.

Wenger suggested both may be included in the England squad to face the Netherlands at the end of the month, although he has not spoken to Fabio Capello.

“Would you be surprised?” he replied, when asked about the possibility of the pair being included.

“Alex was not ready earlier in the season, but he has made a big step in the last months, he produces team play and is not only going forward but contributes to the build up and defending.

“He has improved very quickly, and he is a fighter as well in his personality. He plays like a guy who had talent in September but is much more mature now.”

Oxlade-Chamberlain netted either side of half-time, while Arteta’s volley came just after the interval. Henry’s goal came off Scott Dann in the final moments.

Rovers was not helped by Gael Givet getting a straight red card for a reckless challenge on van Persie.

“You never know how bad it is, and it’s something we cannot afford at the moment, to lose a player like Robin,” Wenger said.

“It was a tough afternoon,” he said. “When you try to compete with 11 men, it’s hard enough.

“The biggest bearing was the early goal and the sending off and the referee did not have a tough decision to make.

“We knew two feet off the ground is not accepted. He was cut up afterwards, he’s a genuine guy, committed, and he’s down at the moment. It was a long afternoon after that.” AFP