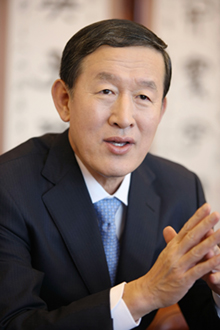 GS Group Chairman Huh Chang-soo has urged new executives of the group to work harder to grasp changes in the business environment.

“It is crucial to respond to changes in the environment and create further change,” Huh said at a dinner with new executive officials at a resort in Jeju on Friday. “To do so, consistent efforts are required for self-development and innovation.”

“It won’t be easy to predict or prepare for the future, but how swiftly we can do so, and how far we are prepared to respond to changes will make us more competitive,” Huh said.

Huh applauded the group for weathering the global financial crisis but said executives should not be satisfied with their achievements.

“A director should not be satisfied with the status quo. Rather, they should be sensitive to changes and create new change,” he said. “Therefore, you should pay more attention to what will happen in the future than what happened in the past or the present.”

Huh also encouraged his underlings by promising them tantalizing rewards. “One of you will be at the helm of our group after 10 years if your efforts bear fruit,” he said.

Additionally, the chairman asked his executives to push for coprosperity in Korea’s business landscape and take a leading role in caring for underprivileged members of society.

During the group’s personnel reshuffle last December, it promoted 28 managers to the role of vice president based on their growth potential, it said.