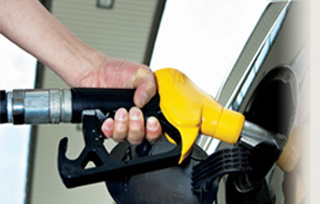 Korean oil corporations enjoyed a banner year in 2011, triggering fears in the industry that they may become the next target of the government’s so-called “corporate bashing.”

SK Innovation announced on Friday that its sales and operating profits last year stood at 68.37 trillion won ($61.26 billion) and 2.85 trillion won, two new records for the nation’s top refiner. The figures were up 27.3 percent and 50.6 percent on-year, respectively.

But the results are causing as much consternation as joy due to the recent trend of singling out large enterprises for reaping large profits at the expense of hard-hit consumers and SMEs. 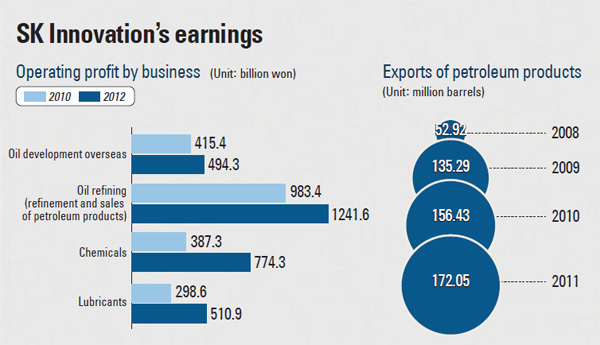 “We are seeing some misunderstandings [about our earnings]” said one official at the Korea Petroleum Association. “Earnings improved, but we made little profit from providing gasoline to gas stations. As oil prices rise again, we are worried that there could be another spate of corporate bashing [aimed at us].”

Korean oil companies claim their sales plunged by up to 800 billion won last year as they were forced by the government to begin lowering their gasoline prices by 100 won per liter from April.

Although their operating profits surged notably, their profit margins nosedived. In the case of SK Innovation, its profit margin on its oil refining business dropped to 2.5 percent from 3.2 percent in 2010. That is far below the average of 6.9 percent posted by the manufacturing sector as a whole.

Observers say the nation’s oil refiners beat the odds last year partly by improving their respective “refining margins.” This improved because prices of petroleum products, which are made by refining crude oil, outgrew prices of crude oil.

According to the International Energy Agency (IEA), refining margins last year stood at $1.49 per barrel, which is significantly better than the loss of 25 cents per barrel recorded the previous year. The IEA based its data on Singapore gross refining margins, which serve as a benchmark for all major Asian refiners.

Korean oil companies excel at processing operations such as recycling cheap oil and turning it into gasoline and diesel, meaning that the higher the refining margin, the more profit they make.

“The refining margin improved last year as increased demand for oil from emerging countries like China and India offset the hike in oil prices caused by uncertainties with Iran [over its nuclear issue],” said one Korean oil industry official.

Another reason behind Korean oil companies’ record earnings was their increased exports of petroleum products, with SK Innovation exporting 10 percent more of these last year compared to 2010.

Given that petroleum products like gasoline and diesel became dearer last year by somewhere between 36 percent and 40 percent, profits on these are estimated to have surged by about 50 percent.

GS Caltex also saw its exports pass $20 billion last year. It and Samsung Electronics ranked as the only two Korean firms to earn so much from overseas shipments in 2011.

Between July 2010 and June 2011, GS Caltex imported crude oil worth $24.3 billion. It then refined this, turned some of it into more expensive petroleum products and shipped a total of $20.5 billion worth of the latter last year - accounting for a significant share of its large profits.

Additionally, Korean oil companies began diversifying their product portfolios last year, another move that paid dividends. Many reinvented themselves as comprehensive energy conglomerates by expanding into chemical businesses and lubricants.

For SK Innovation, 57 percent of its operating profits came from businesses other than oil refining in 2011, such as chemical and lubricant products. In particular, its chemical business reaped almost double the amount of operating profit on-year.

S-Oil also reported that it made more money from selling lubricants than it did from refining oil, posting respective operating profits of 717.5 billion won and 501.6 billion won.