Kim Jong-un is out of mourning, out in public

Kim Jong-un is out of mourning, out in public 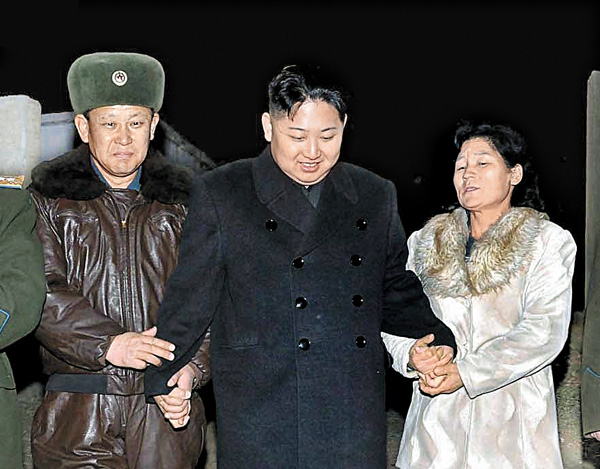 During his inspection of Unit 1017 of the North Korean Air Force on Jan. 31, Kim Jong-un, center, holds the hands of Ho Ryong, deputy commander of the unit, and Ho’s wife, Kim Jong-sil. [YONHAP]

Instead of mourning the death of his father, Kim Jong-un, the young leader of North Korea, is actively traveling the country to boost the morale of the people using the slogan “build a strong and prosperous nation.”

Kim Jong-il died on Dec. 17, 2011, and many North Korea observers thought his youngest son and heir would observe a mourning period. When North Korea’s founder Kim Il Sung died in 1994, his son and heir Kim Jong-il did not make any public appearances for 100 days. Some analysts predicted that Kim Jong-un would observe a three-year mourning period.

But the young North Korean leader quickly began public activities. Only two days after the official mourning period ended in the North, which was on Jan. 1, he made his first public visit to the Seoul Ryu Kyong-su 105 Guards Tank Division of the Korean People’s Army in Pyongyang.

The so-called site inspection took place before the 49th day after the death of his father, which was last Friday. In Korea, a soul is believed to stay in the world for 49 days and then depart for another world.

Since his first trip, Kim Jong-un made 13 more site inspections.

“The photos of Kim Jong-un, who smiles even during his father’s mourning period, captured his agonies and uneasiness,” said Yun Deok-min, a professor at the Institute of Foreign Affairs and National Security. “Because he had such a short period to be groomed as successor, he is emphasizing his personality cult.”

Kim Jong-un is already showing a different public personality than that of his father. While Kim Jong-il maintained a distance from the public, wearing sunglasses and rarely having physical contact with the public, the young successor doesn’t hesitate to act friendly and intimately with the people.

That is the kind of behavior associated with his grandfather, Kim Il Sung.

In a documentary aired recently by the North’s Korean Central Television, Kim Jong-un’s broad smiles and bold gestures were shown. He whispered in the ears of other soldiers and held the hand of a wife of a military leader.

During a visit to an Air Force unit on Jan. 20, he hugged soldiers. When he visited Mangyongdae Revolutionary School on Jan. 25, Kim touched the faces of students and tasted soy sauce.

“After Kim Il Sung’s death, the long mourning period prompted an economic crisis in the North,” said Choi Jin-wook, a director of North Korea studies at the Korea Institute for National Unification. “So, Kim Jong-un appeared to judge that it is better to pay attention to the people’s lives than mourning Kim Jong-il.”

He also said the leader is trying to boost the morale of the people by awarding pardons on the anniversary of Kim Jong-il’s death on Feb. 16.

The young leader also appears to be tech savvy. Quoting a North Korean source, Japan’s NHK reported Friday that he ordered an iPad2 after its release was announced last spring. Having spent his teenage years in Switzerland, Kim is increasingly bringing computer service to the North. Internet connections using Orascom Telecom, the Egyptian mobile network operator in the North, will soon be available, NHK reported.