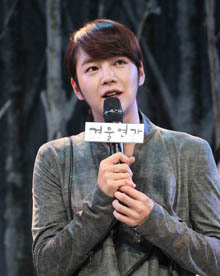 Hallyu star Jang Keun-suk will attend a fan meeting for his film “You Are My Pet” on Feb. 11 at Kyocera Dome in Osaka.

The film opened in Japan on Jan. 21 and in just two days of showing reached the sixth spot on the Japanese weekly movie chart.

Jang’s co-stars Kim Ha-neul, Ryu Tae-joon, Jung Yu-mi and Kang Ha-neul will also attend the event. The fan meet will comprise of dancing and singing performances by the stars as well as a talking forum with the fans.
The event will also be broadcast live and shown in Toho Cinemas across Japan.

Ahead of the film’s release Jang and Kim spent five nights and six days travelling to Tokyo, Osaka, Fukuoka and surrounding parts, holding interviews and promoting their movie.

“You are My Pet is based on the Japanese manga “Kimi wa Pet” (“Tramps Like Us,” 2000-05) by Yayoi Ogawa. The story of the movie is about a bizarre relationship between an ambitious career woman and a young homeless man, whose animal-like charm leads her to adopt him as a pet.

Released in Korea in November, the movie was directed by Kim Byeong-kon, who was involved in producing previous romantic comedy “My Boyfriend is Type-B” (2005).