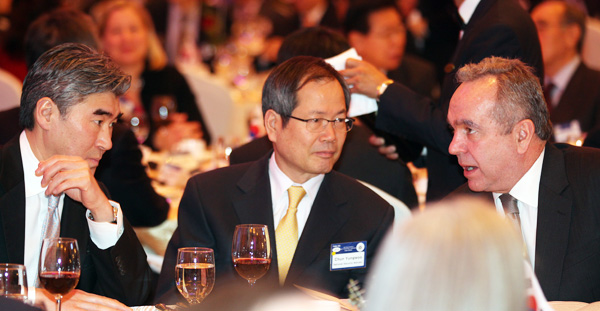 From left to right, Sung Kim, U.S. ambassador to Korea; Chun Yung-woo, senior secretary to the president for foreign affairs and national security; and Kurt Campbell, assistant secretary of state for East Asian and Pacific affairs, converse at the 55th anniversary of the Korea Society, on Jan 31, at the Lotte Hotel in Seoul. [YONHAP]

The Korea Society, a New York-based nonprofit organization founded to foster bilateral relations between Korea and the United States, marked its 55th anniversary in central Seoul, where a series of high-ranking figures celebrated the growing friendship between the two countries.

“As U.S. President Barack Obama mentioned, South Korea is our ‘best friend’ and closest partner,” said Mark C. Minton, president of the society, in his welcoming speech. “We are confident that behind today’s friendship, the Korea Society’s consistent contribution stands.

“The biggest goal of our society is to deliver the latest information on Korea directly to U.S. citizens in order to provide a space for open debate to discuss current issues at the right time,” Minton added.

Sponsored by a string of Korean conglomerates such as Hyundai Motor Group, Samsung Electronics, GS Caltex and others, the event hosted a string of high-profiled business bigwigs, such as Chung Mong-koo, Chairman of the Hyundai Motor Company. Chung received the society’s James A. Van Fleet Award in 2009, a prize established to honor the U.S. General James Van Fleet who served in the Korean War, which is given to Americans or Koreans who put their efforts toward developing Korea-U.S. relations.

Sung Kim, the newly-minted U.S. ambassador to Korea, addressed the history of the society and praised its dedication to diplomacy.

“Fifty-five years ago, in 1957, General James Van Fleet and a group of prominent Americans established the first nonprofit organization in the United States dedicated to the promotion of friendly relations between the people of the two countries, through mutual understanding and appreciation of their respective cultures, aims, ideals, arts, sciences and industries,” Kim said. “I’m a big fan of the Korea Society. It has helped to boost relations between the U.S. and Korea for years.”

For many Korean migrants in the United States and local citizens who are mostly uninformed about Korea, the organization has hosted cultural events and political seminars as well as Korean language classes in America. During the recent Lunar New Year holiday, the society held a large-scale party titled “Family Day: Korean New Year,” promoting Korean traditional holiday customs and dishes.

“Currently, the bilateral relationship between South Korea and the United States is closest than at any time in the past,” Prime Minister Kim Hwang-sik said at the anniversary gala. “Along with the two governments’ efforts on this, I think the various activities in the private sector are also helping boost relations. I asked the Korea Society to play a larger role connecting two countries.”

“The Korea Society plays a critical role in the relationship of our countries,” Kim said. “One of them is our growing people-to-people ties.”

“I think there’s no relationship in the world that the U.S. feels with confidence and comfort than the relationship with Korea,” Campbell said.