Banks get personal with next-gen IT

Banks get personal with next-gen IT 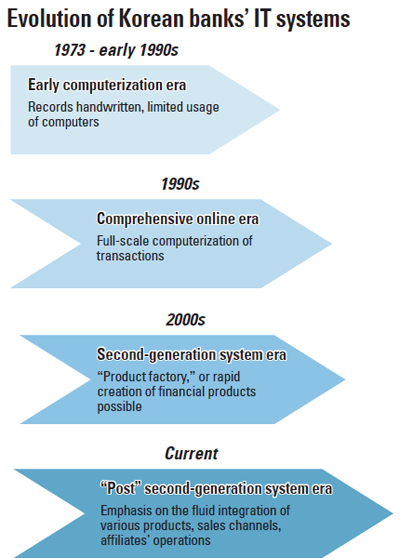 Kookmin Bank customer Yoo Hee-jung was a latecomer to the world of personalized account numbers, having only opened a new account using almost identical digits to her cell phone number last May, but she is already reaping the rewards.

“I tend to just use the account for petty transactions, but the number is really easy to recall and relate to people over the phone,” she said of the service, which was introduced by the Industrial Bank of Korea (IBK) in 2005, but which smaller provincial banks are still in the process of adopting.

The service was made possible as Korean banks and other financial companies are in the final stages of upgrading to “second-generation” IT systems, which allow for the rapid and mass production of financial products.

The personalized account number service has become a growing trend in Korea as consumers increasingly reject uniform products fashioned from the company’s point of view.

Called “lifetime account numbers” in Korea, Kookmin Bank was the latest among major domestic banks to offer the service in 2010, and regional banks such as Busan Bank and securities firms such as Korea Investment & Securities began offering the service this year.

IBK, as the first bank in the country to offer personalized account numbers, said yesterday that more than 1.7 million of the bank’s 10 million customers currently subscribe to the service.

Although the number of users still account for less than 20 percent of bank’s customers nearly seven years after its launch, employees claim that such personalized services generate more customer loyalty.

“We have found that customers are much more likely to continue dealing with our bank when they are using the personalized account number service - the turnover rate is much lower than customers that don’t use the service,” an IBK spokesperson said.

Services like these are emblematic of the progress being made at Korean financial companies’ IT systems.

“Basic computerization programs developed in-house during the 1990s have made way for professionally made and packaged “second-generation” IT systems of the 2000s,” said an IT official at Shinhan Bank.

“The technology that enables banking networks to translate from the easy-to-remember dummy account number to the actual account number only became possible in the last decade,” he added.

With banks like IBK now poised to develop a third-generation IT system, emphasizing the integration of disparate channels and affiliates, financial companies in Korea’s tech-savvy culture are pushing the envelope and using this to forge new revenue streams in smartphone transactions and cash management services.

“A good IT system is the foundation for good marketing strategies,” said Kim Hong-joon, an IT official at IBK. “The number of IT patents submitted by banks is increasing as competition heats up.” In fact, some 22 percent of patents that Hana Bank submitted from 2010 to 2011 were smartphone-based, according to the bank.

Products such as Kookmin Bank’s “KB Dream Talk” installment savings account, which integrates elements of social media into a financial product by allowing customers to post their savings goals on Facebook and Twitter, have been gaining in popularity, with 33,000 users subscribing last year after the service was launched in May.