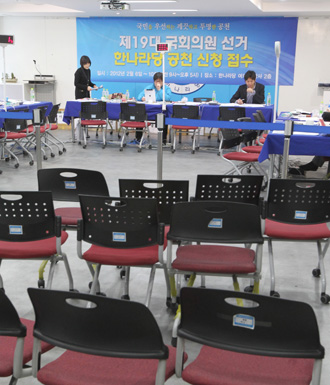 Though the ruling Saenuri Party yesterday began receiving applications for its nominees for the April 11 legislative elections, few people turn up at the party headquarters in Yeouido, western Seoul. [YONHAP]

Aspiring lawmakers who seek the ruling Saenuri Party’s nominations for the April 11 legislative elections are required to reveal their intentions should they fail to win the party’s tickets, a new attempt to prevent failed applicants from running as independent candidates.

As the party yesterday began receiving applications for its nominees, a more stringent rule in the nomination process was revealed. In the past, the party asked applicants to sign a clause saying they would accept the party’s nomination decision. This year, the applicants are asked to declare in writing what they will do if they fail to win a party ticket.

They are also required to sign a pledge that they will not run in the same constituency as an independent or as another party’s candidate if they fail to win the nomination.

Although the pledges are not legally binding, the measure puts moral pressure on the candidates to stay out of the races if they fail to win official nominations. The idea was proposed by Jung Hong-won, head of the party’s nomination review committee. 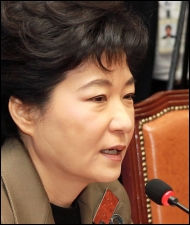 The party has already declared its intention to largely recruit fresh blood and nearly a half of its sitting lawmakers are expected to be axed in the nomination process. The party is rating its current lawmakers and telling the bottom 25 percent not to bother seeking reelection.

According to the nomination committee, the application form includes 140 questions about the candidates and their families. They must provide information on dual citizenships, military service records, residence records, divorce and remarriage histories. The party also said it was mandatory for the applicants to have a social networking service account. The deadline to apply for a Saenuri Party nomination is Friday.

The decision to put additional pressure on applicants to accept the nomination review outcome, even if they fail, appeared to come from the experience of the last legislative elections. After Park Geun-hye loyalists largely lost their nomination bids in 2008, many of them left the then-Grand National Party and created a party of their own. They won 14 seats and most of them were victories over the official GNP candidates.

Representative Park Geun-hye, the interim head of the party, yesterday headed to her constituency in Daegu and met with residents there. Speculation was high that the four-term lawmaker won’t seek reelection in April in a move to encourage a generational change in the conservative ruling party. Park said she will make a decision whether to seek her reelection by the end of this week.

The liberal opposition Democratic United Party also held the first meeting of its nomination review committee to decide its primary rules for the legislative elections. The party’s Supreme Council decided earlier in the day to include mobile phone voting in the primary. The DUP will receive applications starting Thursday and begin the review process next week.