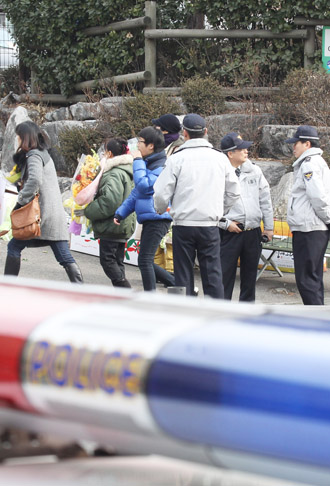 Police officers guard a high school in Seoul yesterday during its graduation to prevent students from indulging in raucous celebrations that often descend into violence, while Prime Minister Kim Hwang-sik announced a set of measures to curb school violence. The central government announced yesterday a set of measures to tackle the problem, saying “There will no longer be any tolerance toward school bullies.” [YONHAP]

Following the December suicide of a bullied middle schooler in Daegu and a national outcry over violence in schools, the government announced yesterday a set of measures to tackle the problem, saying “there will no longer be any tolerance toward school bullies.”

Prime Minister Kim Hwang-sik announced yesterday the government’s latest anti-violence measures, which include giving greater authority and responsibility to principals and teachers to deal with the violence, stiffening punishments for violent students, more protection for victims, and more attention on teaching of ethics.

“This latest set of measures will not be directed at schools alone, like previous measures, but need the attention of schools, parents and the society as a whole,” Kim said. “The government will expose all hidden violence through these new measures.”

Under the new measures, principals will be given authority to immediately suspend bullies and punish teachers who try to hush up cases of violence among students. Teachers will also be empowered to add reports of violence to the permanent records of students, which will be kept for five years after graduation for elementary and middle school students and 10 years for high school students. Teachers will also be obliged to have one-on-one counseling sessions with each student at least once a semester.

The measures also include hiring an extra teacher for each class with more than 30 students at middle and high schools so that teachers can instruct and supervise students in pairs. Teachers will also be evaluated on their ability to deal with violence among their students.

“None of these measures will be effective if teachers don’t make efforts,” Kim said. “I hope the teachers first approach students who need closer attention and hold out their hands offering support. The government will be there to support the teachers.” Kim also promised to visit schools at least once a month.

Hours before the government announced the new measures, President Lee Myung-bak said in his biweekly radio address yesterday that bullies in schools will face police investigations. “Now is high time for us all to join forces and take action to safeguard our children from school violence,” he said.

Other new measures: Victims of school violence in elementary school will not be put in the same middle school as the children who bullied them before. And if the bullying has been severe, victims can be protected by the police and ask officers to keep an eye on violent students.

Critics said yesterday’s announcement was little different from the measures announced by the government in 2005 and 2009, and that some measures conflict with some local education offices’ students’ rights ordinances.

“The government’s measures only shift the responsibility to teachers and parents and merely repeat previous measures to punish violent students,” it said. “The vicious cycle of school violence will only keep repeating itself if measures are focused on punishing bullies,” it said. “Schools keeping permanent records of violent students’ behavior is the same as isolating them from society by labeling them violent students.”