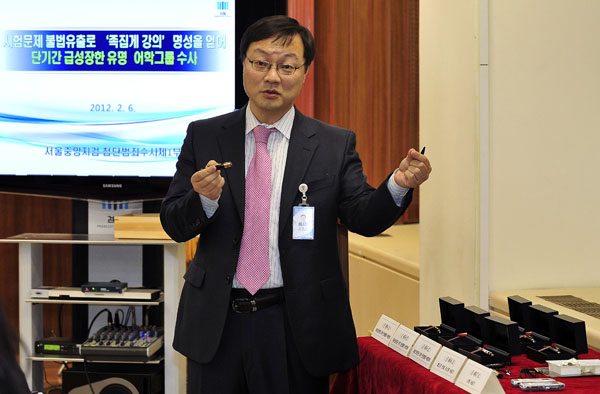 Six people from Hackers Education Group, a top test preparation school, are being investigated for stealing questions on standardized English tests - and going to James Bond-type lengths to do so.

According to the Seoul Central District Prosecutors’ Office yesterday, the group’s CEO, surnamed Cho, 53, was booked without detention and five other employees were brought in for questioning for illegally obtaining test questions and using them as teaching materials for five years.

Hackers sent its own employees to take the English tests, including the Toeic (Test of English for International Communication), and smuggle out the questions in various ways since October 2007, according to prosecutors.

Hackers is charged with stealing questions from the Toeic 49 times and the TEPS (Test of English Proficiency, developed by Seoul National University) 57 times by mobilizing some 50 of their employees.

Hackers Education Group, established in 2002, operates tutorial classes and sells books to prepare students for standardized English tests such as the Toeic, Toefl, Ielts and TEPS, as well as the SAT, LSAT and GRE. It is known as one of the best hagwon, or cram schools, to predict questions.

The Toeic and TEPS exams sometimes recycle questions or ask questions similar to ones on earlier tests.

In the case of the newly introduced NEAT (National English Ability Test), Hackers employees were able to record the listening comprehension portion of the test through special recording devices they placed between their ears and the headphones through which the test was administered.

For the reading comprehension section, the employees used a small camera hidden in a pen. There are no charges against the company stealing NEAT questions.

After the employees had delivered the test questions, Hackers confirmed the correct answers from experts and loaded them on their paid Web site for students to access, prosecutors said.

They wouldn’t keep the questions on the Web site too long to avoid getting caught, prosecutors said.

Hackers has earned a reputation as the best test question predictor in the business. In 2010, prosecutors said, it had sales of over 100 billion won ($89.6 million) and profits of 36 billion won.

“The group’s shares are owned 100 percent by Cho, who since 2001 has worked as a linguistics professor in a national university but has managed the group secretly,” prosecutors said, “further infringing on the ban on civil officials holding more than one office.”

A Hackers representative denied the charges.

“All the English teaching materials are newly created problems and do not infringe upon copyright laws,” he said.