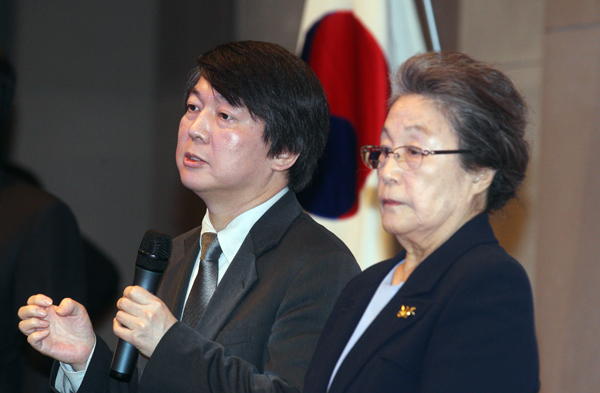 Ahn Cheol-soo, left, and Park Young-sook, right, speak to reporters yesterday at a news conference on Ahn’s charity at the Korea Press Center in Seoul. [YONHAP]

Software mogul Ahn Cheol-soo unveiled his ambitious management plan for his new charity and introduced its board members yesterday, with the aim to provide fair job and education opportunities for the younger generation.

However, the political superstar refused any questions about whether he would run for president in December, but told reporters at the end of the Q&A session that politics “could be one of the various roles dedicated to society.”

“I think the right donation is not a vertical concept in which a high-ranking person mercifully gives something to those below him, but rather a horizontal one where he returns what he has received from society to others,” Ahn said at a press conference held in central Seoul. “I want my humble start to create a certain kind of positive change in our society, fostering a culture of donation.

Ahn introduced the list of board members of the foundation, which hasn’t been yet given a name, including the chairwoman Park Young-sook, an 80-year-old feminist and a senior advisor to the Korean Foundation for Women.

“For the past 60 years, I have dedicated myself to offering better lives for people through donations, building Korea’s first public foundation for women,” Park said. “I want to work as a member at the forefront until the end of my life.”

At the beginning of the press meeting, where hundreds of reporters waited for his remarks on his political career, Ahn briefly said, “Let’s talk only about the foundation today.”

But when he was asked about his future career, he said, “So far, I started all work out of the intention of what I could do for positive change. Maybe politics could be one of them.”

“However, I don’t think whether I enter politics or not is an essential issue,” he said. “I’m just a person who thinks about what role I could play for the positive development of society.”

According to Ahn and the board members, the foundation will emulate two foreign nonprofit organizations, Causes and Kiva, which both motivated hundreds of thousands members worldwide to donate not only their money, but their talent and time through social networking services such as Facebook.

Kiva enables members to lend their money to underprivileged people in the form of microloans, which the recipients pay back later.

“We will establish a platform of donation through high-end IT technology in order to allow anyone to donate in easy and pleasant ways,” Gang Yeong-cheol, the official lawyer of the foundation, told reporters.

“Using smartphones and social networking services, we will enable people to donate along with their families and friends anywhere, anytime they want, and make recipients pay back what they received to other people in need.

“The main concept of our system is that donators and recipients are all friends, in equal partnership,” Gang emphasized. The foundation is expected to be authorized at the end of March and start in early April, Ahn said.

Since rumors spread that doctor-turned-professor Ahn could run for December’s presidential election, the stock price of his company, Ahn Lab, has jumped up to 125,000 won ($111) from 85,000 won. Ahn has announced he will donate half of his 37.1 percent stake in his software company.