Park may be absent in game versus Kuwait

Park may be absent in game versus Kuwait 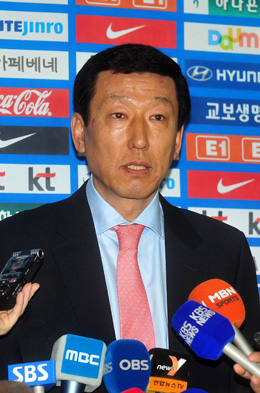 National football team coach Choi Kang-hee said yesterday he is seriously contemplating whether or not national team captain and current Arsenal striker Park Chu-young should be included on the roster for the upcoming third-round Asian qualifier for the 2014 FIFA World Cup against Kuwait on Feb. 29.

Park, along with some other Korean footballers based in Europe, have seen little time on the pitch of late. The coach, 53, left for England on Feb. 3 in order to evaluate the condition of the footballers and returned yesterday without seeing Park on the pitch.

In fact, no potential Korean national team player based in Europe played during Choi’s visit.

“I haven’t really learned much [from my trip],” Choi said at Incheon International Airport upon his return. “Since players in foreign leagues are not playing in their games, I have a lot to consider.”

Arsenal striker Park was named as a substitute against Blackburn Rovers on Saturday, but never came off the bench. The Gunners were thrashing Rovers 6-1 but manager Arsene Wenger put Thierry Henry, Bacary Sagna and Yossi Benayoun on as second-half substitutes instead of Park.

Henry, who is currently on loan from Major League Soccer club New York Red Bulls, scored another goal at the end of the game, bringing the final score to 7-1.

Choi said he had a chance to talk with Park a day after the match.

“He has at least some positive thoughts, as he is with a world-class team like Arsenal,” Choi said. “But he is not playing in games and I felt that Park is not on Wenger’s mind.”

It was an unfortunate weekend for Choi because even the Celtic duo - Ki Sung-yueng and Cha Du-ri - was absent from Saturday’s action against Inverness in the Scottish FA Cup.

Choi said that the biggest obstacle for these Europe-based players to join the national team is that those players will not have had enough training with other Korean teammates. According to FIFA rules, clubs have to release their players to the international team four days prior to a match, but Choi presented negative views as to whether the players can join the team training in time.

“In reality, if we consider each club’s situation, I think they will be able to join the team on Feb. 27,” Choi said. “But it’s impossible that those players can show a strong performance with the team in just a day.”

Choi said that the KFA could ask for cooperation from the European clubs and request that the players are released early, but wouldn’t expect good results.

Korea’s domestic clubs have already agreed to give their players up early. The K-League-based players are expected to join the national team training from Feb. 19, 10 days before the match date.

“I have listed two or three players per position at this moment,” Choi said. “Even if a player has great skills, he can’t play in the match if he is not ready.”