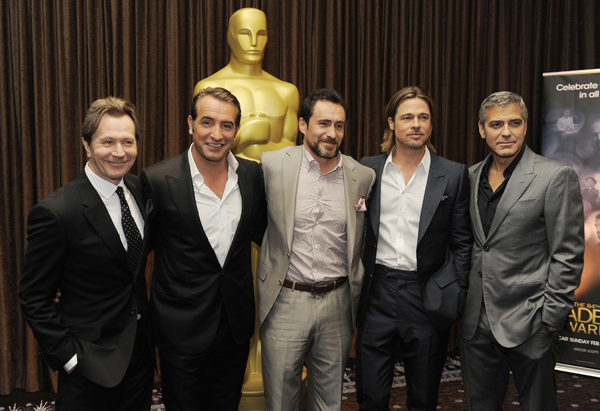 At the annual Oscar nominee luncheon Monday, Clooney said he’s made new pals on the awards circuit this season and has been happy to catch up with longtime friends such as Viola Davis and Brad Pitt, his co-star in the “Ocean’s Eleven’’ movies.

“A lot of people at home think we all hang out together. .?.?. The truth is I hadn’t seen Brad in about a year’’ until they crossed paths at January’s Golden Globes, Clooney told reporters before sitting down to lunch. “So it’s fun to catch up, and it’s fun to see people I like and haven’t seen in a long time.’’

Both are up for the best-actor Oscar - Clooney for “The Descendants’’ and Pitt for “Moneyball.’’

Pitt joked that like Clooney, awards season has allowed him to make a lot of new acquaintances.

Along with Clooney and Pitt, others among the 150 nominees at the luncheon included “The Help’’ co-stars Viola Davis and Octavia Spencer; “Albert Nobbs’’ co-stars Glenn Close and Janet McTeer; “The Girl with the Dragon Tattoo’’ star Rooney Mara; “My Week with Marilyn’’ co-stars Michelle Williams and Kenneth Branagh; “The Artist’’ co-stars Jean Dujardin and Berenice Bejo; and “Hugo’’ director Martin Scorsese.