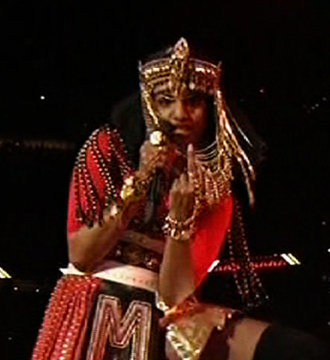 Television network NBC and the NFL apologized for a rude gesture flipped by British hip-hop star M.I.A. during her halftime performance at Sunday’s Super Bowl, but one advocacy group called for further action.

At Sunday’s show, M.I.A. joined Madonna on stage with U.S. hip-hop star Nicki Minaj and was performing the cheerleader themed “Give Me All Your Luvin”’ from Madonna’s latest album when M.I.A. extended her middle finger in a fleeting, obscene gesture while facing the camera.

NFL spokesman Brian McCarthy said in a statement that NBC was to blame for a technical failure. “There was a failure in NBC’s delay system. The gesture in the performance was completely inappropriate, very disappointing, and we apologize to our fans,” he said.

NBC sports spokesman Christopher McCloskey shifted more of the blame back to the NFL, saying, “The NFL hired the talent and produced the halftime show. Our system was late to obscure the inappropriate gesture and we apologize to our viewers.”

Madonna was the first female Super Bowl halftime headliner since Jackson’s performance of 2004, during which fellow performer Justin Timberlake tugged at her costume, exposing her nipple to millions of TV viewers and causing an uproar. Reuters