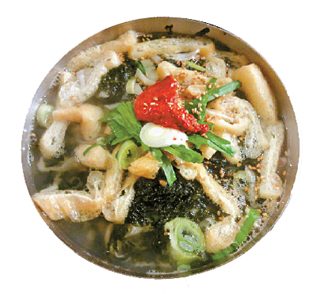 Standing in front of Namhae restaurant on a cold Monday afternoon, Lee Suk-hee, 42, said that the 40-minute bus ride from her home to Namdaemun market will all be worth it after a bowl of the restaurant’s famous kalguksu, or knife-cut noodle soup.

“Especially during winter, I sometimes have this impossible-to-escape craving for Namdaemun kalguksu,” Lee said.

“Last night, I really wanted to come here for a bowl but decided to wait until morning and here I am!” 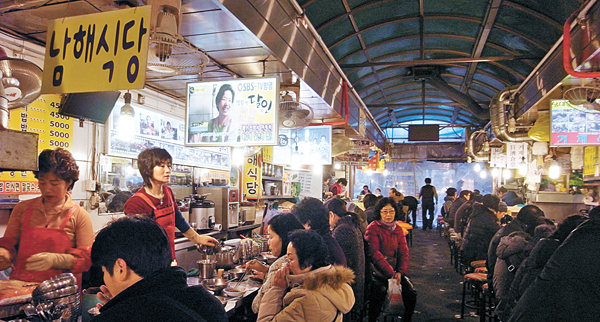 Even through this is the coldest February in over 50 years, Namdaemun market and its restaurants are buzzing with customers who will gladly wait in line for the tasty yet affordable offerings. 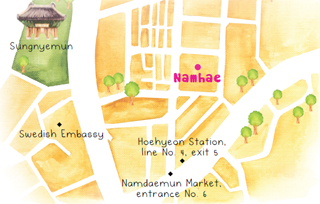 Compared to most traditional markets around Korea that are struggling to stay open, Namdaemun and the other major outdoor markets in Seoul, including Dongdaemun, Gwangjang and Gongdeok, are all doing relatively well. And for these markets, much of their business is reliant on the famous food alleys that surround them.

But for kalguksu fans in Namdaemun, the news seemed far away.

Even at around 4 p.m. last week, a few hours after lunchtime, the market’s Kalguksu Alley was full of eager customers.

Kim Jin-sun, the owner of Namhae restaurant, said there are still many days when she doesn’t have a single moment to rest her legs because the restaurant is so popular.

Some say market restaurants bring back memories long forgotten. Over at Gwangjang market, Hong Sung-young, a 60-something customer, said Sonnheene restaurant, where he is a regular, reminds him of his childhood, when people would casually gather in the market for no special reason and chitchat over a plate of nokdujeon, or savory Korean pancake.

Meanwhile, new visitors appreciate the markets for the new memories they have been able to make. Song So-min, a student who is studying in United States, said she visits Namhae restaurant in Namdaemun market every time she visits Korea.

“This is a hideout for my mom and I,” said Song.


Namdaemun is the oldest traditional market in Seoul and its history dates back to the Joseon Dynasty (1392-1897).

From the 1970s until the 1980s, the number of vendors at Namdaemun Market grew at a rapid clip.

At present there are 10,172 shops selling more than 1,700 types of products, including domestic and imported foods, eyeglasses and camping gear.

But if you’re speaking of food, the dish that best represents Namdaemun is kalguksu, or knife-cut noodle soup.

According to Jang Young-suk, who sells kalguksu and bindaetteok (mung bean pancake) at the market, Namdaemun’s Kalguksu Alley started to take shape in the late 1970s, although in the beginning the restaurants mostly sold bindaetteok and soju.

“But it wasn’t profitable to sell only bindaetteok and soju because customers tended to stay a long time, drinking and eating,” she said. “So restaurants started selling kalguksu, which is usually eaten fast and fills you up. Once one restaurant changed its menu to feature kalguksu, others followed suit.”

There are now around 12 restaurants situated in Kalguksu Alley, with the owners calling out to passersby to come in for a bowl of their soup.

At Namhae, which opened more than 20 years ago and is one of the most famous restaurants in the alley, the regulars still come back for more.

“I come to Namhae regularly and the taste has been the same for the last 20 years,” said Kim Hyo-sun, a regular in her late fifties.

The main dish at this popular restaurant is kalguksu (right), but the restaurant also offers bibimbap (rice mixed with vegetables) and bibimnaengmyeon (cold buckwheat noodles mixed with red pepper sauce).