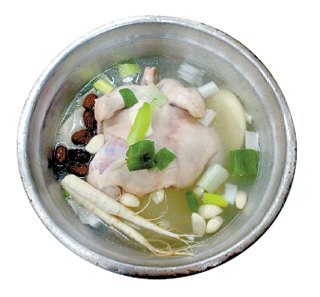 More than 80 percent of fabrics that are traded in Korea are from Dongdaemun Market, established in 1905. The buildings large and small that populate the area around the market are packed with over 4,300 shops featuring fabric and sewing supplies as well as clothing, accessories and designer knock-offs.

Now featured on such TV shows as “Project Runway Korea,” the market is a crucial part of Korea’s fast evolving fashion industry. Keen retailers and savvy shoppers alike sift through new fabrics and accessories that are brought in every morning. And according to the Council for Special Tourism District in Dongdaemun Fashion Town, over 2.5 million international tourists visit the market annually.

The market is also famous for its food stalls, which developed 30 years ago because of a nearby bus terminal, according to Ji Gyeong-ja, the owner of Myungdong Dak Hanmari.

“People who used the bus terminal needed to find food that was cheap and made them feel full,” Ji said, adding that was the reason people started selling dak hanmari, or whole chicken soup, which consists of a whole chicken stuffed with rice and herbs. 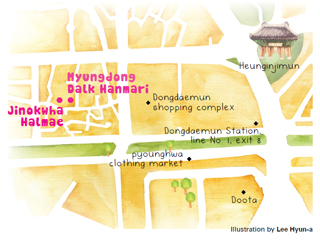 There are seven restaurants that sell dak hanmari in the market. The oldest are Myungdong Dak Hanmari and Jinokhwa Halmae.

The main dish here is dak hanmari (right). After the chicken is consumed, the restaurant will fry the rice with the remaining broth and other seasonings. The restaurant also serves a porridge made with chicken and glutinous rice.