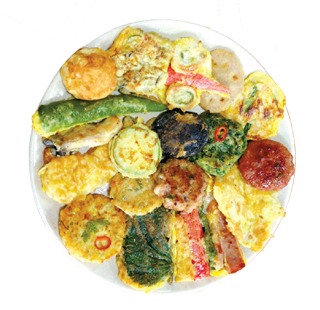 Gongdeok Market established itself in the early 1970s but is currently struggling after discount retailer E-mart opened only 200 meters away early last month. According to Gongdeok Market Association, having E-mart just around the corner has been a challenge for the more than 400 people within the market.

One portion of the market that is still thriving, however, is an alley lined with bindaetteok restaurants.

The market became famous for bindaetteok during the 1980s and Mapo Grandma, merchants say, was the first to open.

According to its owner, starting the restaurant wasn’t an easy task. 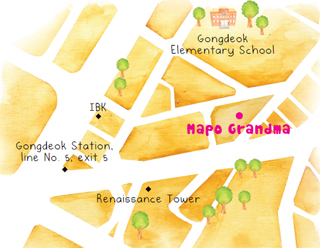 “I tried selling ice cream and fruit but nothing worked and bindaetteok was my last option,” said Seo Mun Jung-ae, owner of Mapo Grandma.

Seo is now in her 70s and still makes the bindaetteok herself. “For more than 25 years, I’ve woken up around 5 a.m. to prepare the ingredients,” Seo said.

Seo said the number of bindaetteok restaurants has increased on the back of the creative innovations of the restaurant owners as they tried to beat their competition.

“New ideas for bindaetteok come along and that’s how the number of bindaetteok restaurants has increased over the years,” Seo said.

Seo’s edge lies in the color of the bindaetteok she makes. She serves 20 types of bindaetteok, made from diverse ingredients such as mung beans, oysters, fish cake, shiitake mushrooms, sesame leaves and more. These ingredients give her bindaetteok its unique color.

“I don’t like artificial coloring, so the colors are made naturally with the vegetables I use,” Seo said.

Mapo Grandma offers a colorful selection of bindaetteok (right) made from fresh vegetables and other ingredients and a range of equally colorful fried foods that together form an eye-catching display in the restaurant’s front window.