Going global an antidote to crisis

Going global an antidote to crisis 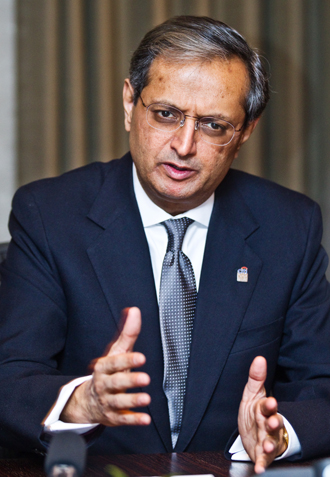 Vikram Pandit, CEO of Citigroup, pointed to greater cross-border trade as a key cure for the effects of the global economic slowdown by building momentum for growth and job creation.

Visiting Seoul this week in the first stop in his tour to celebrate the 200th anniversary of multinational banking giant Citigroup’s founding, Pandit cited Korea as a prime example of the growing force of globalization.

He said this is a growing trend that could offset the wave of restructuring and job losses witnessed since the 2008 global financial crisis, aftereffects that have bred widespread contempt for Wall Street.

Excluding Citibank Korea from the brunt of the group’s recent restructuring efforts, Pandit dispelled criticism concerning the local unit’s lackluster growth and high dividend payments by noting the bank’s sound capital adequacy rate as well as the strength of its digital channels.

Talking to media yesterday in Seoul, Pandit addressed the recent spate of anger directed toward financial institutions both around the world and in Seoul, a trend best symbolized by the Occupy Wall Street movement.

“It’s important that [the banking industry] regains trust, and in order to regain trust [we must] focus on the customer,” he said.

He noted that Citigroup, the third-largest bank in the U.S. by assets, is honing in on three questions to practice responsible finance - asking whether the transaction is right for the client, adds economic value for the client, and is “systemically responsible.”

Pandit also drew attention to the need to create new jobs, one of the issues discussed at the recent World Economic Forum in Davos, Switzerland. He said the world needs 200 million new jobs now, and double this within a decade.

When asked how this could be reconciled with corporate restructuring efforts, such as Citigroup’s recent plan to cut 4,500 of its 267,000 employees, Pandit said countries must bolster global trade, strengthen private partnerships and keep financial systems secure and sound to foster balanced growth.

“Korea is proof against some financial experts’ belief that globalization is on the decline,” he said, noting that exports currently take up 57 percent of Korea’s GDP - up from roughly 35 percent 10 years ago.

He noted that the nature of globalization is in the process of transforming from an “axis” model, where many countries trade with one central hub such as London, to a two-party model that puts both trading partners on an equal footing.

In response to the charge that Citibank Korea has come to a virtual standstill in terms of market share since acquiring the now-defunct Hanmi Bank in 2004, Pandit said the group’s strategy has always been to focus on its strengths. It aims to utilize the banking group’s business network in some 140 countries by devoting resources to both corporate and retail clients with a multinational presence.

Pandit also noted four important trends in the current market - deleveraging; low interest rates, especially in advanced markets; new financial regulations, such as the Volcker rule in the U.S. that limits banks’ speculative investments; and the Basel III standards on bank soundness that are in the process of being implemented by various governments.

“Such trends can become an opportunity or a crisis,” Pandit said. “The goal of financial reform is to get banks back to basics.”

During his three-day stay, Pandit met with the heads of Samsung Group’s financial affiliates as well as local financial regulators before taking part in a 200th anniversary celebration late yesterday at the Grand Hyatt Seoul Hotel, central Seoul.