To beat the bustle, banks head to SE Asia

To beat the bustle, banks head to SE Asia 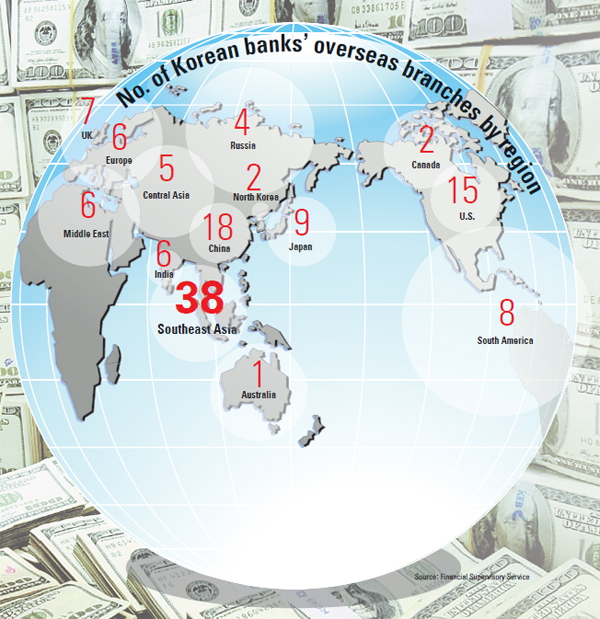 Korean banks have once again telegraphed their ambitions of expanding overseas, particularly in Southeast Asia, to diversify revenue sources amid the overcrowded domestic market.

He said Shinhan will increase its overseas profit coverage from the current 3 percent to 10 percent by 2015, adding that it intends to acquire a bank in Indonesia with total assets of roughly 100 billion won ($89.2 million) to facilitate this.

Woori Financial Group Chairman Lee Pal-sung made a similar comment earlier this year, adding that it is now in the process of negotiating to buy two local banks in Southeast Asia, including one in Indonesia. 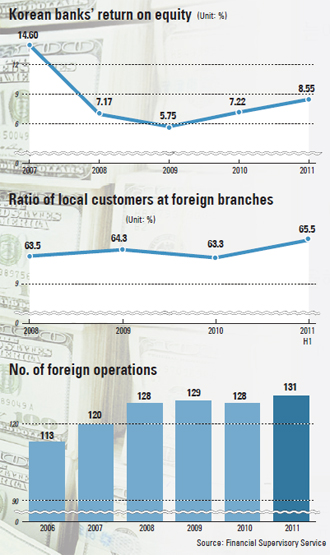 Hana Financial Group Chairman Kim Seung-yu stressed that venturing into the global market is not an option but a necessity for Korean banks’ long-term survival.

This is not the first time the heads of local banks have kicked off the New Year with plans to increase their respective presences overseas. In fact, such sentiments have become a common theme in recent years.

But none have managed to build a commanding presence outside Korea so far, unlike the manufacturing sector, which has fiercely extended its global market share.

Domestic banks saw their combined net profit jump 29 percent to 12 trillion won last year from 2010 despite the competition heating-up on their home turf.

However, their return on equity (ROE) has steadily moved down from 14.6 percent in 2007 to 8.55 percent last year, while their average net interest margin (NIM) dipped from 2.44 percent to 2.31 percent over the same period.

Korean banks have been seeking to build new profit bases overseas by gradually increasing the number of their foreign branches. They owned a total of 131 branches in 34 countries in the first half of last year, according to the Financial Supervisory Service.

In particular, they have been concentrating on Southeast Asia, with nearly 30 percent of their overseas operations set up in the region.

As bank chiefs mentioned earlier this year, Indonesia is strategically important as it is the fourth most populous country in the world with more than 240 million people, not to mention the allure of its abundant natural resources - an indicator of strong growth potential.

“Korean banks have long been eyeing the Southeast Asian market, not only because it is geographically close, but also due to its growth potential,” said Hong Hun-pyo, an analyst at KTB Investment and Securities.

“It would be a financial burden to buy U.S. or European banks at this point as it is not easy to assess the damage that has been inflicted on them by the sovereign debt crisis.”

Another stumbling block for banks’ expansionist moves is their relative lack of competitiveness in advanced countries in Europe, as well as the U.S.

This soon becomes clear when looking at gauges such as the Transnationality Index (TNI), which measures foreign assets, overseas sales and the proportion of foreign employees, among other factors. At the end of last June, local banks’ TNI was abysmally low, standing at 3 percent. In contrast, HSBC, one of the most powerful banks in the region, had a TNI of 64.7 percent.

Although banks have managed to lure slightly more local customers and capital at their overseas branches in recent years - as opposed to Korean expats or businesses operating in the respective countries - growth has been slow and arduous.

In the first half of last year, local customers at overseas branches of Korean banks accounted for 65.5 percent of the total, a small improvement from 63.3 percent one year earlier. On a global level, local currencies as a proportion of combined total holdings climbed from 34.7 percent to 37.8 percent over the same period.

Experts point to a number of obstacles preventing the banks’ smooth and steady progress in foreign markets, such as their governance structure and, to a lesser degree, low levels of brand recognition.

For some, though, the situation improved in the wake of the 2008 global economic crisis, which many Korean conglomerates and lenders took as an opportunity to expand. As the Korean won weakened against the U.S. dollar, exports helped them increase their profits, generating more capital to invest in their global operations. As a result, Korean manufacturers now rank among the world’s top 10 in several business areas, while domestic financial firms’ global recognition remains low.

“The Korean economy has thrived because of its manufacturing industry, and therefore companies like Samsung and Hyundai Motor are well recognized,” said Im Il-sung, an analyst at Shinyoung Securities.

“On the other hand, financial firms’ brand recognition in the global market is low, which is why Korean financial services lack the global competitiveness to compete in markets outside of Korea .?.?. That is why banks are focusing on Southeast Asia, where Korea is more recognized and respected.”

Some experts say that banks have their hands tied by the way they are governed, unlike chaebol that are managed by their owners.

“Major conglomerates have owners known for acting swiftly and decisively, like Samsung Chairman Lee Kun-hee or Hyundai Motor Group chief Chung Mong-koo, and this helps smooth their foreign expansion,” said an official from the banking industry, who requested anonymity.

“But banks are not managed by their owners, and they need to seek the approval of major shareholders before making decisions, which makes it harder to pursue larger investments in overseas branches or seek M&As,” the official added.

“This is even harder for banks that have large government stakes like Woori, which the government has been having trouble selling because of its size. Because of this, it is reluctant to expand further.”