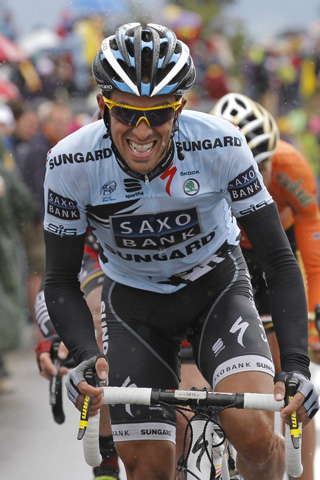 In this July 19, 2011, file photo, three-time Tour de France winner Alberto Contador of Spain grimaces as he breaks away during the 16th stage of the cycling race. [AP/YONHAP]

MADRID - The decision to strip Alberto Contador of his Tour de France title and ban him for two years for doping is another blow to the sport, cycling greats Eddy Merckx and Miguel Indurain said Monday.

Contador was stripped of his 2010 Tour title Monday when the Court of Arbitration for Sport rejected his claim that his positive doping test was caused by eating contaminated meat. The Spaniard, who also won cycling’s premier race in 2007 and 2009, joined Floyd Landis as the only riders to lose a Tour title.

Contador tested positive for clenbuterol from what he claimed was contaminated beef eaten on a Tour rest day in July 2010. The CAS called the claim “unlikely,’’ saying the positive result “was more likely caused by the ingestion of a contaminated food supplement.’’

Contador has been banned from racing until Aug. 6 with all of his results since Jan. 25, 2011, erased, including his Giro d’Italia victory last May. He is ineligible for this year’s Tour, Giro and the London Olympics.

Indurain, who dominated the Tour from 1991-95, was surprised by the verdict.

“I was convinced that he would be cleared,’’ Indurain was quoted as telling Marca TV by Spanish news agency Europa Press. “The [case] dragged on not just a little bit but a long time since the Tour.

“The longer he waited, the more time passed, and at the end the penalty was the maximum that he could receive. Now he has to keep working and stay in shape. He has known how to fight through the tough moments and he will continue doing so.’’

Andy Schleck, who finished 39 seconds behind Contador in the 2010 Tour, is now in line to become that year’s champion. But the rider from Luxembourg said that “will not make me happy.’’

“I feel sad for Alberto. I always believed in his innocence. This is just a very sad day for cycling,’’ Schleck said. “The only positive news is that there is a verdict after 566 days of uncertainty. We can finally move on.’’

Tour director Christian Prudhomme said he was relieved a resolution was reached, although the case had revealed many of the sport’s problems in dealing with doping cases.

“[The decision] is obviously very late, too late,’’ Prudhomme said. “It is absolutely necessary that, even though sports’ justice like any type of justice needs serenity and even though the case was extremely complex, the outcome of that type of case come sooner.’’ AP