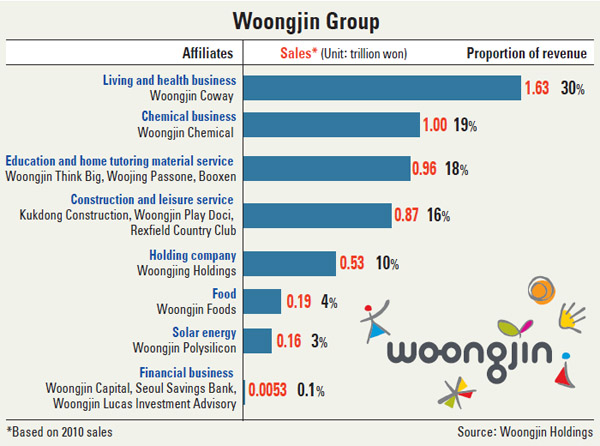 Woongjin Holdings saw its shares rise by the daily limit of 15 percent yesterday in the wake of its announcement Monday that it will sell off its cash cow Woongjin Coway, the nation’s largest water purifier manufacturer.

The parent company plans to offload its affiliate as it faces a liquidity crunch resulting from a series of aggressive mergers and acquisitions.

“The sale will alleviate risks in Woongjin Group’s financial structure and give the company an opportunity to continue its solar energy business,” said Lee Sang-gu, an analyst at Hyundai Securities.

Kim Min-a, an analyst at Daewoo Securities, also gave a positive outlook on the plan as a win-win deal for both parties involved in the future transaction.

“It will help the Woongjin Group save money and enhance its financial soundness while providing the buyer with a new business opportunity,” Kim said.

Kim estimated that Woongjin Coway raised a total of 1.7 trillion won ($1.5 billion) in sales last year and an operating profit of 238 billion won.

Woongjin Holdings said it will put 28.37 percent of Woongjin Coway shares up for sale. It aims to designate a preferred bidder in March and complete the bid within the first half of this year, according to officials.

Woongjin Coway is the dominant force in Korea’s water purifier industry and controls around 48 percent of the market, followed by ChungHo Nais, Amway, Tongyang Magic, Kyowon L&C and LG Electronics. Market watchers estimate the nation’s water purifier market is worth around 1.5 trillion won.

Originally founded as a small publishing company with seven employees based on an investment of 70 million won in 1980, Woongjin has grown into the nation’s 32nd-largest chaebol by assets with 15 affiliates in the fields of education, publishing, living appliances, solar energy, chemicals, finance and construction as of last year.

Several years ago, the group entered the construction and savings bank industries after snapping up or fusing with established companies in a bid to boost its overall competitiveness.

But Woongjin’s hopes of becoming a key challenger in these two sectors were cut short when the construction industry was pummeled by the 2008 credit crunch and Korea’s savings banking sector was hit by corruption scandals and bad loans.

Woongjin Group officials said that selling Coway will help the group’s affiliates regain their financial health in a way similar to what happened in the aftermath of the Asian financial crisis. When Woongjin was on the brink of bankruptcy in 1998, the company sold another of its highly lucrative enterprises, Koreana Cosmetics, to secure enough funds to revive its other affiliates, according to officials.

However, the holding company stressed that it will not be putting Woongjin Coway’s chemical and cosmetics businesses up for grabs.

“The move is designed to secure enough funds to inject into the group’s two solar energy affiliates, Woongjin Energy and Woongjin Polysilicon,” said Cho Jae-il, a senior public relations official at Woongjin. “Solar energy is the group’s core future growth engine and we aim to nurture our solar business to become a top-three player globally.”

LG Electronics, SK Telecom and KT&G have been named by industry sources as potential bidders for Woongjin Coway.