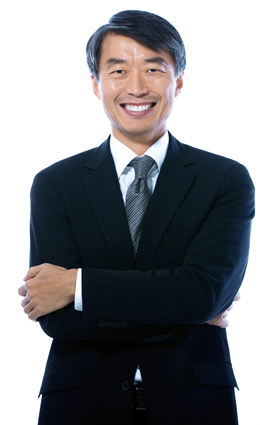 Chung Chang-ho, Judge at the Extraordinary Chambers in the Courts of Cambodia

Chung Chang-ho joined the United Nations in 2008 when he was dispatched to Vienna to work as a Korean representative at the UN Commission on International Trade Law. Now the 45-year-old judge divides his time between the Austrian capital, Korea and Cambodia after he was seconded to the developing Southeast Asian country to participate in the ongoing trial of former Khmer Rouge commanders and jailers, which is being led by the UN.

The reign of terror engineered by Communist leader Pol Pot saw public executions, torture, party purges and forced labor become the norm in Cambodia from 1975 to 1979, when around half the country’s population of seven million people died.

Although human rights abuses are the focus of Chung’s latest posting, he is considered an expert in legal areas related to electronic commerce. He recently visited Korea to give a presentation at a seminar in Songdo, Incheon, hosted by the United Nations Commission on International Trade Law (Uncitral) on what role Uncitral can play in the Asia-Pacific region. He sat down with the JoongAng Ilbo to talk about the work he has done and why it is important to introduce Korea’s legal system to the world.

Q. The Khmer Rouge case is extreme ly high-profile. Do you feel under a lot of pressure?

A. It is not an easy case, but I feel very proud to be a part of this epoch-defining trial. Nonetheless, it surprises me just how much attention the international community is paying to this. Not just Cambodians, but human rights organizations are closely monitoring all details of the case.

The case was terminated at the end of 1970s. How did it become reactivated?

The leader of the Khmer Rouge, Pol Pot [who was born Saloth Sar] died [in 1998] without being tried in court, and too many other criminals in the case avoided punishment. This was due to the continuing civil war and also because a lot of members of the Khmer Rouge remained in politics long after the party collapsed.

Why is it so important to get them tried four decades after the event?

The UN’s stance is that it needs to send a message that crimes against humanity will be punished without any statute of limitations. For Cambodians, I think, it means that they want to clear away the past.

They also hope to strengthen their legal system through the experience of working with the UN. I think that is why the entire trial is being broadcast. It is a good chance to show that the country is now governed according to the letter of the law, and that people are found guilty or innocent according to legal evidence.

Have you sought advice from other Korean judges who are also working at international organizations?

I totally agree with their comments that it is important for Korea to participate in international human rights trials in order to upgrade its standing in the global community.

Wasn’t it a bit of a jump from working with electronic commerce law to the Khmer Rouge case?

I totally did not expect to be given this opportunity, but Uncitral has helped me build up my reputation. I’m very lucky to get to work on two fields with the UN - international commerce and international human rights - both of which it has been putting a great deal of emphasis on.

Can you tell us a bit about why you became so interested in electronic commerce, your area of specialization?

Korea is a few steps ahead of the rest of the world in terms of its electronic commerce technology and legal policies related to that field. For example, it was a Korean company that first found a way to make mobile phone payments possible. Apart from the usefulness of these technical innovations, they also spur legal analysis of the system so that such services can be used in people’s everyday lives.

In the example you just mentioned, what kind of problems need to be legally ironed out?

When people make payments on their cellphones it means that nonfinancial institutes - such as your phone carrier or another company - act like a financial institute. So the legal liability of these parties needs to be fixed in order to deal with problems as they arise. Under its electronic commerce law, Korea has already ensured that these companies share the same level of responsibility as financial institutions. However, the United States and European countries still lack such laws.

Does the world stand to benefit from such advanced legal systems?

It is possible that Korea’s mobile payment law could become an international standard by means of the United Nations. This would also make it easier for more domestic companies to work in the global community. This is one of the reasons why countries work so hard in lobbying Uncitral to recognize their laws as global standards.

Regarding the Uncitral conference in Incheon, how do you usually prepare for these?

First I try to get a complete grasp of the materials distributed by the UN. But just reading them isn’t enough - I always translate the entire document into Korean. For a week-long conference, I would usually receive about 50 pages of material, and I will translate it all. This helps me understand it better [despite being fluent in English], and it also enables me to send some of the documents back home to share with my peers.

I often don’t get to bed before 3 or 4 a.m. Beyond this, I try to picture how the debates on those documents could be resolved in accordance with Korean law, which helps me clarify and reflect Korea’s proper stance on the subject when I make statements at international conferences.

You are also known as an art lover. How did you develop this side interest given your grueling schedule?

I thought I would not be able to be a convincing judge if I were just to pore through cases and records day in and day out. So I made a promise to myself that I would do something different at least once a week. I first got interested in art when I attended a training program at the London School of Economics in 2001. I used to go to the Tate Modern and the National Gallery.

Meanwhile, in Vienna, I got to know more about Korean singers, and from this blossomed an interest in opera. After I saw how many young Korean singers were able to partner up with famous foreign singers there, it inspired me to do a better job in my chosen field.

How do you find it working with judges and representatives from other countries?

I sometimes ask Korean singers to invite UN representatives to their performances, as I would like more people to become familiar with Korean culture and music. As it transpires, such “soft” or cultural power is more effective than I at first thought. Going to the performances together has made it easier for me to build relationships with them.