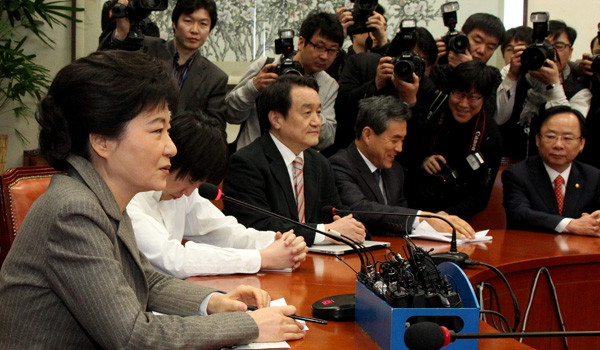 Park Geun-hye, left, interim leader of the ruling Saenuri Party, presides over a lawmakers’ caucus yesterday at the party headquarters in Yeouido, western Seoul. At a news conference after the meeting, Park announced she will not seek re-election in her constituency of Daegu “to jump into larger politics.” [YONHAP]


Representative Park Geun-hye, the interim head of the ruling Saenuri Party, said yesterday she won’t seek re-election in her constituency of Daegu in the April legislative elections, taking one step closer to announcing a presidential bid.

Asked if she will still list herself as a candidate to become a proportional representative for the party, Park said she will discuss the matter with the party.

Logo of the ruling Saenuri Party

Park won her first by-election to represent Dalseong County of Daegu in 1998. She was re-elected three more times, but it was widely speculated that she would stay out of the April legislative race to managing the election for the party and prepare for a bid in December’s presidential election.

Her decision is expected to discourage older politicians with multiple terms under their belts from seeking re-election as the conservative ruling party struggles to redefine its image among younger voters.

“The party is in a serious crisis, and I am responsible to make a choice as its emergency council head at this very difficult time,” Park said with teary eyes.

In a move to assuage disgruntled party members over the change of the Grand National Party’s name, Park and other leaders defended the change at a lawmakers’ caucus yesterday.

After the caucus, the party agreed to use the new name, but some lawmakers protested the party’s new symbol and its color, which is red.

The emergency leadership of the conservative party announced last week its decision to rename the party as part of its attempt to revamp its image ahead of the April 11 legislative elections.

Reformist lawmakers of the party criticized the Park leadership for having made the decision without enough consultation with lawmakers and senior party members.

At the caucus yesterday, Park did not hide her displeasure over the lawmakers’ challenge, but tried to persuade them to accept the new name.

She said the party had used the name Grand National Party for 15 years so it was natural to feel strange about any new name. “If you love it and use it, you will feel close to it,” she said.

Earlier in the day, the emergency leadership adopted a new symbol in red and white, abandoning the sky blue of the old GNP logo.

“The colors are from the Korean national flag,” said Jo Dong-won, a copywriter and publicist who is in charge of public relations and planning for the party. “The white represents the white-clad Korean people, and the red symbolizes passion.”

Jo said the new symbol represents a bowl that will contain the people as one.

“It is also based on the shape of lips to represent a smile,” he said. “When you turn it vertically, it is the shape of an ear. This means that we will listen to the people.”

The name of the party in Hangul contains a letter in the shape of a traditional key, Jo said, explaining “It means we want to open a new world.”