A kinda cleanup on sidewalk bikes

A kinda cleanup on sidewalk bikes 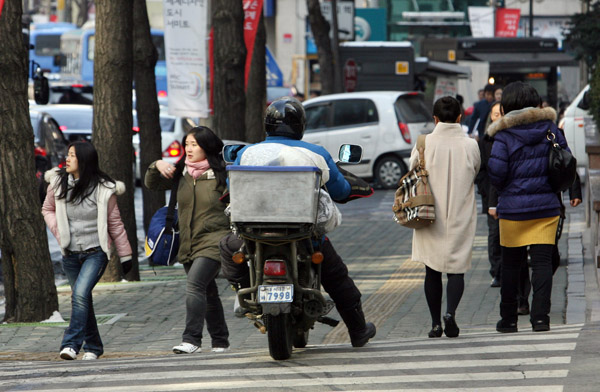 A motorbiker doing his thing on a sidewalk in Seoul. [JoongAng Ilbo]


Even a fresh-off-the-boat newcomer to Seoul would find it hard to believe that it’s illegal for motor scooters to zoom down sidewalks.

And long-time residents realize those bikes are part of the zippy pace of the city, responsible for the speedy deliveries of documents, pizzas and Chinese restaurant meals that people have come to expect.

The Seoul Metropolitan Police Agency announced Monday that it is cracking down on scooters speeding down sidewalks because of the danger they pose to pedestrians.

But it’s not a full crackdown. The target will be the scooters that are going too fast or otherwise being crazy.

“This announcement is not a threat that we’ll fine all motorbikers on sidewalks,” said Jang Sam-jong, an officer at the Seoul Metropolitan Police Agency, “but an attempt to urge and guide them off the sidewalks for the sake of pedestrians’ safety.”

In Seoul, delivery motor scooters zigzag from streets to sidewalks to avoid traffic, but police have left them alone, despite an increasing frequency of accidents. About a year ago, the death of a 19-year-old pizza delivery boy sparked controversy, which made pizza franchise Domino’s drop its promise of deliveries within 30 minutes of an order.

But that controversy was over the welfare of the delivery guys on motorbikes. The current crackdown is directed at protecting pedestrians.

According to Seoul police, out of a total of 40,541 traffic accidents last year, about 4,340 cases involved two-wheeled vehicles. A total of 95 people were killed last year due to motorbike accidents, 22 percent of the 429 traffic fatalities last year. Police said 10 percent of the accidents involving motorcycles happened on sidewalks or crosswalks.

The semi-crackdown started Monday and will continue until March 31. Motorcyclists who are caught zooming on sidewalks will be fined 40,000 won ($35) and receive 10 penalty points on their licenses.

“ I experienced several spine-chilling experiences due to motorbikes speeding up from behind on sidewalks,” said Park Hyo-tae, 29, who owns a store in Dongdaemun Market selling clothes.

Traffic police will be deployed to 74 locations for the crackdown, including Dongdaemun.

The plan doesn’t please people in businesses that rely on quick deliveries.

“Unless it’s running red lights or speeding, people whose livelihoods hang on deliveries should be excluded from this crackdown,” Park Seong-man, 37, a “quick service” deliveryman told the JoongAng Ilbo. Quick services in Korea deliver just about anything from documents to computers by motorcycles.

“It’s wrong to speed on a sidewalk, alarming pedestrians,” said Kwon Tae-seong, 53, a Chinese restaurant owner in Anguk-dong, central Seoul. “But it’s unfair to regulate bikes on sidewalks because we have to use the sidewalks to deliver food before it gets cold.”