Chun’s security detail to be booted off city land

Chun’s security detail to be booted off city land 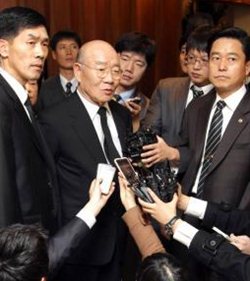 The Seoul Metropolitan Government, taken over by liberal mayor Park Won-soon in October, is kicking the security team for former President Chun Doo Hwan off a piece of property it’s occupied for free for 25 years.

One of the reasons is that Chun, Korea’s last dictator, has a three-year-old unpaid tax bill, the city said.

The city government said it notified the police Monday that a two-year free lease on the plot at 95-7 Yeonhui-dong, western Seoul, expires April 30 and will not be renewed.

It advised the police to find an alternative for Chun’s security.

“We’ve decided to use the area as a cultural space, as it was intended to be used,” an official of the Seoul Metropolitan Government told the JoongAng Ilbo.

The government said the plot is in the Yeonhui Seoul Art Space, which is supposed to provide a high-quality working environment for writers and poets.

A building is occupied on the plot by the security detail.

The police aren’t happy about the situation.

“The security team has used the facility since 1987 without any problems,” a spokesman for the National Police Agency told the JoongAng Ilbo. “It’s not right to kick someone out just because he has different political tendencies from the new mayor.”

The city government also said Chun hasn’t paid more than 300 million won ($268,000) owed in taxes after he sold a house to his brother-in-law three years ago. “We’ve judged that it’s not right to offer public property for free to someone who hasn’t paid a tax for that long,” an official said

Chun ruled Korea with an iron fist from 1979 to 1988 and is best remembered for his suppression of the democracy movement and the brutal crackdown in Gwangju in 1980.

In April 1997, the Supreme Court sentenced Chun to life in prison and fined him 225 billion won for his crimes, most of which was never paid. Chun was given a special pardon by former President Kim Young-sam in December 1997.

Security for former presidents is guaranteed by the law.

“Whatever he has done in the past, the security for a former president should follow the rules and processes that are stated in the law,” Jeong Yoo-jae, a professor at the Academy of Korean Studies, told the JoongAng Ilbo. “Popularity of a specific person should not be considered in this issue.”

If the city government refuses to cooperate, the police may have to purchase an alternative site. “But if we purchase land, it will became useless when the presidential couple dies,” a spokesman of the National Police Agency said.

“The request made by Mayor Park is a tall order,” he said.