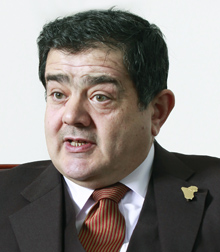 The top Iraqi emissary to Korea said in an exclusive interview with the Korea JoongAng Daily yesterday that Iraq will welcome a request to increase its oil supply to Korea.

Korea imported 89.7 million barrels of oil from Iraq last year, or 9.68 percent of all Korea’s oil imports that year, according to the Ministry of Knowledge Economy - even more than the 9.41 percent from Iran.

“I don’t see a problem if Korea requests to buy more oil from Iraq,” Iraq’s Ambassador to Seoul Khalil Al-Mosawi said. “I think it will be welcomed.”

The interview was held at the Iraqi Embassy in Seoul on Monday and was augmented by an additional telephone interview yesterday.

Months before a new U.S.-initiated sanction on Iran’s oil supply reared up to send Korea in desperate search of an alternative oil supply, Korea had an agreement with Iraq to receive preferred treatment in regards to oil supply.

The agreement, made in April 2011 between visiting Iraqi Prime Minister Nouri al-Maliki and Korea’s then-Knowledge Economy Minister Choi Joong-kyung, is to provide at least 250,000 barrels per day of Iraqi oil to Korea ahead of many other countries in case of emergency. Iraq, which holds the world’s third-largest oil reserve at 143 billion barrels, produced 2.39 million barrels daily in 2010.

The agreement, however, is yet to take effect due to pending approval from the Iraqi parliament. According to an official from the Knowledge Ministry, the agreement, if it goes into effect, will double oil imports from Iraq, although the official said a final increase in Iraqi oil imports will depend on negotiations between the two countries.

Al-Mosawi said approval is just a matter of time.

Al-Mosawi did not give a time line but he said the agreement is scheduled to go through the Iraqi parliament.

Iraqi Foreign Minister Hoshyar Zebari will come to Korea next week to talk about bilateral cooperation, according to the ambassador. A ministry official said the talks that the minister would have with Seoul officials would possibly include cooperation on oil supply.

With the U.S. military withdrawal completed at the end of last year, Iraq is entering a new phase of recovery from the Iraq War. The upcoming Arab League summit to be held in Baghdad in March marks the first time Iraq will host the event since the Iraq war broke out in 2003.

The ambassador said Iraq is ready to host the event successfully and send a “big signal to the world” that Iraq is on course to resuscitate its potential role for the region and for the international community.

He said, however, his country still needs help for reconstruction from many countries, including Korea. He said Korea can play a significant role, as it has done over the past years citing reconstruction assistance by Korea’s Zaytun Division between 2004 and 2008 and the Korea International Cooperation Agency.

Iraq, with a population of 30.4 million and land approximately twice the size of the Korean Peninsula, also attracted investment from 10 Korean companies, cumulatively worth $220 million until June last year.

Iraq requests “the continuation of assistance from the Korean government and Korean people,” the ambassador said. “You have to look at the improvement of relationships. We need you and you need us.”