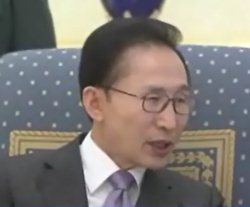 In a meeting with Saudi Arabian Minister of Petroleum and Mineral Resources Ali bin Ibrahim Al-Naimi in Riyadh, President Lee Myung-bak spoke highly of Saudi Arabia’s efforts to stabilize global oil supply and prices as a leading member of the Organization of the Petroleum Exporting Countries and requested a “stable oil supply” for Korea in case of emergency, according to the Blue House.

In response, the minister said the country will positively consider assistance for Korea if Korea requests it, the Blue House said.

Saudi Arabia is the biggest oil exporter to Korea. It provided 240 million barrels in the first 10 months of last year, or 31.4 percent of Korea’s total oil imports in that period. In 2010, it provided 32.8 percent.

According to Blue House officials, the meeting between Lee and the minister was arranged in response to uncertainty in the global oil markets over the sanctions.

The minister, former chairman of the state-owned Saudi Arabian Oil Company, is such an influential figure in the Saudi oil industry and government that he has been dubbed the “oil president.”