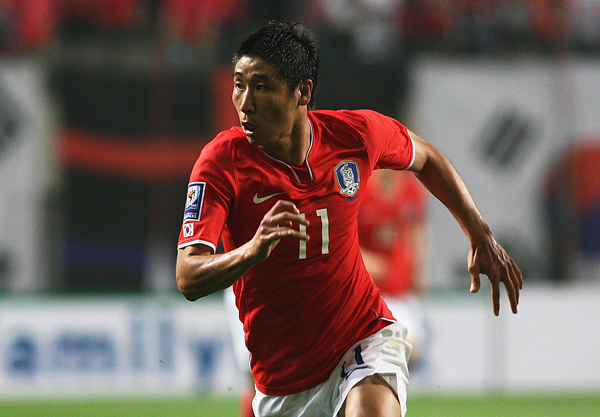 In this file photo taken on June 10, 2009, Korea forward Lee Keun-ho dribbles during a match against Saudi Arabia at Seoul World Cup Stadium. By Lee Ho-hyoung

Lee’s yellow Mohawk wasn’t the only thing about the footballer that had changed when he stepped foot back on the peninsula. The 27-year-old has shown impressive personal growth during his time abroad, and the Incheon-native says he is ready to play well during his K-League comeback season and help the Taegeuk Warriors reach the 2014 FIFA World Cup.

Lee has had an up-and-down career. He debuted in the professional league with his hometown club, Incheon United FC, in 2004 but failed to become a regular member of the first team.

However, after winning the Most Valuable Player award in the second tier of the K-League in 2006, Lee was transferred to Daegu FC the next year, where he became a formidable offensive threat.

In two seasons with Daegu, the forward scored 23 goals and became known as one of the league’s most lethal attackers. During his time with the club, Lee made his national team debut and participated in the 2007 Asian Cup.

After the contract with Daegu ended in 2009, Lee aimed for a more ambitious goal: playing in Europe. It was reported that teams like Paris Saint-Germain and Willem II wanted him, but with contract issues and transfer regulations, his dealings with European clubs fell apart.

For Lee, failing to sign with a European club was a blow to his rising status as an elite Korean footballer.

He had subpar performances during his two seasons with Iwata and failed to make the national team squad during the 2010 FIFA World Cup.

But after being transferred to Gamba Osaka in the summer of 2010, Lee began to rise again. Last season, he had his best season in Japan, scoring 15 goals, the third-largest total in the league, and tallied 11 assists.

With the slump over, he has also performed well for the national team. Last November, he notched a late second-half goal against the UAE in the third round of Asian qualifiers for the 2014 FIFA World Cup, helping secure Korea’s 2-0 victory.

In an interview last week with Ilgan Sports, the JoongAng Ilbo’s daily sports newspaper, Lee said the secret to reversing the slump in his career was getting rid of greed and overcoming the pressure to produce results.

Q. Do you feel pressure to carry Ulsan’s offense this season?

A. I do feel the pressure, but I will overcome it. As always, I will show energetic and brilliant performances in front of fans.

How would you rate your last three seasons in Japan?

The football in Japan emphasizes a delicate process in producing goals. It also has a good environment outside of football and I felt no discomfort playing in Japan. But as a foreign player, I had a lot of pressure to show more than my abilities.

What led you to return to the K-League?

I stayed in Japan longer than I thought I would. I felt that I had to go back to the K-League while going through last season. Coach Kim Ho-kon told me lot of good things and moved my heart.

How many goals do you expect to score this season?

I scored 15 goals last year, so I want to net 20. I will have more appearances [than in the J-League] and if I perform well, I might be the top scorer. It’s important when the first goal comes through.

How do you feel about your previous performances on the national team?

It is true that my past performances haven’t been that good.

After I failed to sign with a European club, I became hasty and lacked confidence when I played on the national team. But when I left greed behind, I got better. It took me two years to get rid of greed. In the past, I was under a lot of stress to show results to be free of criticism. But now I’m different.